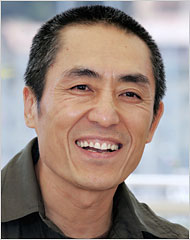 With the Olympics now finished, we can look forward to Victor Cha’s Beyond the Final Score: The Politics of Sport in Asia, which provides historical and political perspectives on the just-completed Games.For those more interested in the man behind the pageantry and aesthetics of the Olympics, CUP and its distributed presses have some titles that examine Zhang Yimou, the man behind the acclaimed opening and closing ceremonies.

China on Screen: Cinema and Nation by Christopher J. Berry and Mary Ann Farquhar, New Chinese Cinema: Challenging Representations by Sheila Cornelius, and Reinventing China: A Generation and its Films by Paul Clark all include lengthy discussions of Zhang Yimou, his films, and his influence on Chinese cinema.

Michael Berry’s Speaking in Images: Interviews with Contemporary Chinese Filmmakers includes a discussion with Zhang. In the interview Zhang talks about his experiences living during the Cultural Revolution, the “Fifth Generation” filmmakers, his cinematic influences, working in Communist China, and the making of films such as Red Sorghum, Raise the Red Lantern, and Hero.

We need to give filmmakers more space and room for national cinema to develop and unfold.  System reform is the most pressing need for us in the film industry. I’m not sure if I will see it happen in my lifetime. I’m not sure if I will live to see true creative freedom in China and be able to realize my dream of exploring the Cultural Revolution through cinema. I don’t know. But I do know that this is the single most pressing problem.