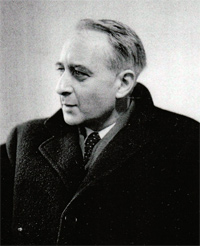 In a recent Newsweek article, Jeremy McCarter describes 2008 as an annus mirabilis for literary critic, frustrated novelist, and former Columbia professor Lionel Trilling. Three books by Trilling were published or reprinted this year, including the never-before-published novel, The Journey Abandoned. Here’s how McCarter describes the novel:

“[The Journey Abandoned] has a superior style to [Trilling’s] other novel’s, one that dazzles in its own right, and not just when graded on a critic-who’s-moonlighting curve. When describing the boyhood of the central character of his bildungsroman, he’s wry and anthropological without being clinical, like the narrator in a Truffaut film.

As dedicated readers of the CUP blog know, the Newsweek article is just the tip of the iceberg. Trilling and The Journey Abandoned have also been featured as part of a lengthy discussion on The Valve, and has been the subject of lengthy articles by Louis Menand and Cynthia Ozick.

Finally, on October 3 from 1:30 to 7:00 Columbia University will be hosting “Lionel Trilling and His Legacy,” which will include talks by Louis Menand, Michael Wood, Ross Posnock, Jonathan Arac, and others.