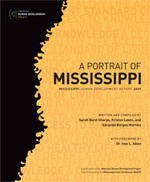 Mississippi has long had the reputation for being one of the poorest and most stratified states in the United States but how accurate is that assessment in 2009? According to the just published A Portrait of Mississippi, the state ranks last on the American Human Development Index. Some groups in the state enjoy well-being levels similar to those in top-ranked Connecticut, while others experience levels of human development of the average American nearly a half century ago.

The authors of The Measure of America: American Human Development Report, 2008-2009 have recently completed A Portrait of Mississippi, which can be downloaded for free at measureofamerica.org. The new report on applies the Human Development Index to Mississippi, measuring the quality of life in the state by considering the capability to earn a decent living, to have access to a quality education and affordable health care, to enjoy cultural liberty, and other factors. The approach was first developed by the United Nations to measure third-world countries.

The report reveals both the poor quality of education in the state as well as the continuing discrepancies among Whites and African Americans in income and health. You can read some of the main findings and recommendations here. And, below is one of the reports main recommendations for improving the standard of living:

Ensure that working families can make ends meet. White men in Mississippi are, on average, earning about $5,000 more per year than the typical American worker today. But African American women today earn less than the typical American in 1960; African American men earn what typical Americans earned in 1970; and white women what typical Americans earned in 1980. More than one in five Mississippians lives below the poverty line; nearly seven in ten public school stu­dents qualifies for a subsidized lunch. Other states help working families meet a basic monthly budget with a state earned income tax credit, state minimum wages, affordable housing, affordable health care options, and subsidized childcare. Such policies help to create an infrastructure of opportunity for all.