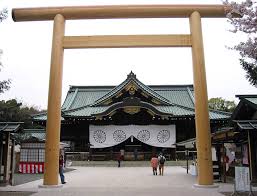 In yesterday’s New York Times, A. O. Scott reviewed Li Ying’s controversial documentary, Yasukuni, which recently opened in New York City. The film “explores [Japan’s] legacy of militaristic nationalism, illuminating both the noble customs and the brutality entwined at its heart.” Yasukuni is a shrine dedicated to the Japanese war dead and holds the remains of war criminals. In recent years visits to the shrine by Japanese politicians has sparked protest in Japan as well as in China, Korea, and Taiwan.

The controversy surrounding the shrine is also the subject of Yasukuni, the War Dead, and the Struggle for Japan’s Past, edited by John Breen. The book presents authoritative yet divergent views on the shrine and its place in postwar Japanese diplomacy, ideology, and history. Critical contributions are written by leading Yasukuni and anti-Yasukuni Japanese intellectuals, as well as Chinese and Western commentators.

For more you can browse and search the book’s content.

And here’s a trailer for the documentary: