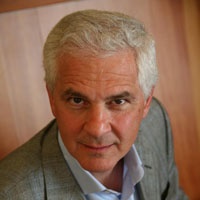 In addition to his recent piece in the Huffington Post, Joe Cirincione, author of Bomb Scare: The History and Future of Nuclear Weapons, was also interview by Daily Kos.

Cirincione has been discussing the Nuclear Posture Review (NPR) which is developed by the Pentagon and determines policies and weapons systems for the next five to ten years and is usually done once during a president’s administration. Ciricione’s main concern is that despite Obama’s ambitious plan to cut back on nuclear weapons, the White House’s lack of involvement in the NPR might mean that the interests of the pentagon and defense contracts will win out at the expense of weapons reduction. As Ciricione puts it:

So the nuclear bureaucracy—that is, the nuclear laboratories, the defense contractors, the ideologues, and the small section of the military still involved with nuclear weapons understand this, and they are waging a battle to basically tweak the current Cold War structure to make it—to pay lip service to Obama’s agenda without actually changing much of anything.

So we could very easily end up with… “Bush light”: the Bush nuclear policies and posture tweaked just a bit, and given an Obama gloss. If the Pentagon has its way, that’s what’s going to happen.