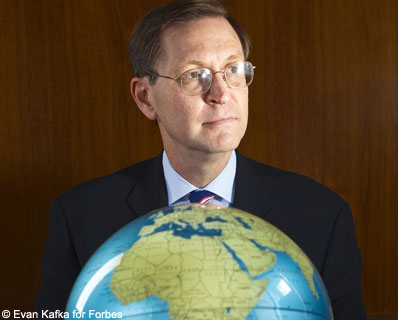 An article to be published in the October 5th issue of Forbes discusses R. Glenn Hubbard (pictured above) and William Duggan’s new book The Aid Trap: Hard Truths About Ending Poverty and their proposal for a Marshall Plan for Africa. Traditional aid, as an increasing number of economists and experts argue, has not worked in Africa and in many ways the continent is worse off despite the money that has poured in from charity organizations, NGOs, and foreign governments.

In light of recent history, Hubbard and Duggan propose “that the U.S. government make direct loans to businesses and then direct the repayments of principal to host governments for use in building roads, electric grids, schools and the like. This was how the Marshall Plan rebuilt Europe after the war.”

Hubbard and Duggan recognize that a Marshall Plan for Africa might take up to forty years and that twenty-first century Africa does not enjoy the same advantages as even war-ravaged Europe. However, they hope the policymakers will not only be motivated to develop a new way of helping Africa in order to improve the lives of Africans but also because a more prosperous continent has important national security implications: “Hubbard and Duggan hope that the national security argument will weigh in favor of aid reform. After all, where economic reconstruction has utterly failed, terrorists can find root, as Somalia and parts of sub-Saharan Africa demonstrate.”

The article, by Michael Maiello, concludes with the following endorsement of Hubbard and Duggan’s approach:

The new Marshall Plan’s chief virtue, however, is its pitch for honesty. After decades of failing to bring prosperity to Africa, it requires that we acknowledge the bankruptcy of a decades-old model which, while salving consciences in the West, failed abjectly in its mission.