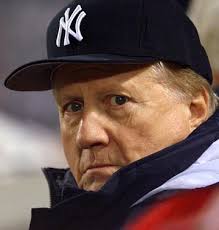 With yesterday’s news of George Steinbrenner’s death, we thought we would highlight some of the highlights (and lowlights) from his remarkable run as owner of the New York Yankees. The dates and events are taken from The Greater New York Sports Chronology, edited by Jeffrey Kroessler:

1973: On January 3 a syndicate formed by forty-two-year old Cleveland businessman George Steinbrenner, owner of the American Ship Building Company and part-owner of the Chicago Bulls, purchased the Yankees for $10 million from CBS ($3.2 million less than CBS had paid for the team in 1964….”It’s the best buy in sports today. I think it’s a bargain,” said Steinbrenner.

1980: On October 25, after the Yankees lost their third straight [World Series game] in Los Angeles, a pair of drunken Dodger fans approached George Steinbrenner in his hotel elevator. They called his team “chokers” and New Yorkers “animals.” Steinbrenner responded with an obscenity and, in a brief brawl, landed two rights and a left, sending both men to the floor. At a press conference in his hotel room the Boss said, “I clocked them. There are two guys in this town looking for their teeth, and two guys who will probably sue me.” The men never surfaced.

1987: Lou Pinella was out as Yankee manager on October 19, and Billy Martin returned for a fifth and final time.

1990: On July 30, baseball commissioner Fay Vincent banned the Yankee owner from day-to-day involvement with the club after determining that he had paid gambler Howard Spira $40,000 to dig up dirt on [outfielder Dave] Winfield. Steinbrenner’s lifetime ban lasted until March 1, 1993.

1999: On January 6. George Steinbrenner made a pilgrimage to the Yogi Berra Museum on the campus of Montclair State University and apologized to Berra for having sent Clyde King to fire him 16 games into the 1985 season. Berra had vowed never to set foot in Yankee Stadium as long as Steinbrenner owned the team. “I know I made a mistake by not letting you go personally,” said the Boss. “It’s the worst mistake I ever made in baseball.”

2007: George Steinbrenner yielded control of the team to his sons Hank and Hal, and after the season they forced out Joe Torre, who went to the Dodgers.