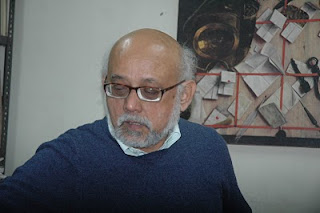 “The non-scholarly and unstoppably influential book of all time for me is The Communist Manifesto. Even today, reading it gives me a thrill.”—Partha Chatterjee

We have been fortunate enough to publish in the United States books from the great Indian publisher Permanent Black , which is known for its titles in South Asian history, politics, and culture.

In the interview, Chatterjee discusses democracy in the non-Western, Indian context, how Lineages of Political Society relates to his other work, and contemporary Indian politics. The interview is also notable for Chatterjee’s more personal reflections. Here he is on the impact of his upbringing in Kolkata (Calcutta):

I am sure the experience [of growing up in Kolkata] has been central to my intellectual formation. The Kolkata I grew up in the 1950s and 1960s was often described as the most horrifying example of urban degradation anywhere in the world. I vividly remember as a college student waiting at bus stops besieged by begging mothers with infants in their arms; vast swathes of the city’s pavements were inhabited by homeless people from the countryside…. I also think the relative isolation of Kolkata in the academic life of India and its lack of well-endowed universities and institutes actually helped me to stay out of the obligations and temptations to which those located in Delhi, for instance, are subject. I had the chance to improvise, innovate, and think outside the prevailing orthodoxies.

In another illuminating exchange, Chatterjee answers a question about what non-scholarly books have affected him:

This is a difficult question to answer. I can think of Amitav Ghosh’s In an Antique Land that set me thinking about using the historical archives to construct a fictional account of a long lost world and comparing that account with current ethnography. I suspect my reading of Amitav’s book had something to do with the birth of Princely Impostor. I can also think of Orhan Pamuk’s Istanbul which absolutely captivated me. It would be far-fetched to claim that it has any resemblance to my soon-to-be-published The Black Hole of Empire but somewhere, I suspect, there is a trace. As for other books, I once used to read books about science, and two of them are my all time favourites – Brighter Than a Thousand Suns by Robert Junck, and One, Two, Three … Infinity by George Gamow. Another bestseller I still find thoroughly intriguing is Gödel, Escher, Bach by Douglas Hofstadter. A book by a philosopher that I think is exemplary for its innovativeness and lucidity is Ian Hacking’s The Taming of Chance, but I don’t know if you’ll think of it as entirely non-scholarly. Finally, the non-scholarly and unstoppably influential book of all time for me is The Communist Manifesto. Even today, reading it gives me a thrill.