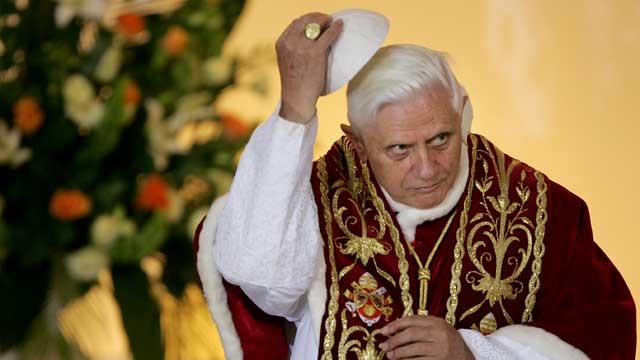 “For all his influence, the pope makes up an infinitesimal fraction of the opinions and activities of Catholics.”—Julie Byrne

Julie Byrne, author of O God of Players: The Story of the Immaculata Mighty Macs and the forthcoming The Other Catholics, recently argued in a CNN op-ed that there’s more to the Catholic Church than the pope.

While Pope Benedict’s recent resignation understandably received a lot of attention, a singular fascination with the pope is hardly new among Americans or the media. However, it fails to appreciate the amount of change taking place in Catholicism among practicing Catholics and the laity.

In her essay, Byrne cites three movements in Catholicism that goes against the Roman Catholic hierarchy: vernacular Catholicism, Non-Roman Catholics, and flows between Rome and other institutions.

First, vernacular religion. This refers to religion as it is actually lived, rather than how leaders say it should be lived. A term coined by Leonard Primiano of Cabrini College, vernacular religion highlights that while clerics write creeds and command pulpits, official religion is the tip of the iceberg of religious culture.

This became visible in coverage of bishops’ activism against President Obama’s health care law provisions for artificial birth control. The bishops held the official position that artificial birth control was morally wrong. Most news accounts added that a majority of U.S. Catholic women used it anyway. This addition was a start, but it needs to go further. According to doctrine, women were “going against” their Church. But in terms of vernacular religion, their everyday Catholicism was simply different from the approved version.

As several noted in the comments, Catholicism has already split. Catholicism is actually not one structurally unified body — and hasn’t been since 1054. The Orthodox churches are Catholic, the biggest headed by the Patriarch of Constantinople. The Anglican Communion (including the U.S. Episcopal Church) identifies as both Catholic and Protestant, headed by the Archbishop of Canterbury. The Old Catholic churches of Europe formed in the late 19th century as harbor for Catholics who rejected papal infallibility; they are in communion with Anglicanism.

In the United States at least 200 separate small Catholic churches and clergy associations exist, often with their own bishops. Some are CORPUS, a corps of married priests who celebrate the sacraments; Roman Catholic Womenpriests, who like many others are ordaining women; and the Ecumenical Catholic Communion, which has partnered with the other two groups.

Third, flows. Some people live in several Catholic worlds. In the United States, a Catholic woman might attend a Roman parish, work for Catholic Charities, serve as an independent Catholic priest, officiate weddings for divorced Romans on weekends and do Buddhist meditation every morning, too.