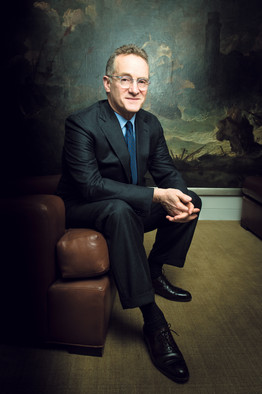 The most recent issue of Barron’s features Howard Marks, author of The Most Important Thing Illuminated: Uncommon Sense for the Thoughtful Investor. The book is an update of his his best-selling The Most Important Thing but the new edition includes comments, insights, and counterpoints of four renowned investors and investment educators: Christopher C. Davis (Davis Funds), Joel Greenblatt (Gotham Capital), Paul Johnson (Nicusa Capital), and Seth A. Klarman (Baupost Group), as well as a foreword by Bruce Greenwald.

The article discusses the three commentators’ respect for Marks’s investment strategy and philosophy as well as remarkable success and that of his fund Oaktree Capital Management. The company consistently has high scores, prompting Warren Buffett to praise Marks’s famous memos to investors as must-reads. In 2007, Marks sensed the dangers of the sub-prime mortgage market and invested and prepared accordingly, providing his clients with another solid return amid the chaos in the wake of the financial collapse in 2008.

Marks grew up in Rego Park, Queens, the son of an accountant, whose investment philosophy was borne not only from his experience on Wall Street and his MBA from the University of Chicago but also his interest in Japanese culture:

Marks was particularly struck by the Buddhist concept of mujo, which holds that life and human affairs are a ceaseless process of transience and change to which the wise adjust. “Isn’t this the essence of investing?” he asked in one of his memos.

His experience investing for Citicorp in the 1970s provided for a crystallization of what is crucial for investing:

Perhaps most trenchant in Marks’ investing philosophy is his insight into investor behavior. Investors, in his opinion, tend to be lazy and superficial in their investment decisions, embracing rosy scenarios when optimism reigns and end-of-the-world despond when markets sink. Classic manic-depression, in other words, and not the wisdom of crowds. These swings cause markets to move in a pendulum motion around fair value, rather than in the linear direction most observers assume. That means investors must be astute, both in determining fair value and judging the amplitude of each emotional wave.