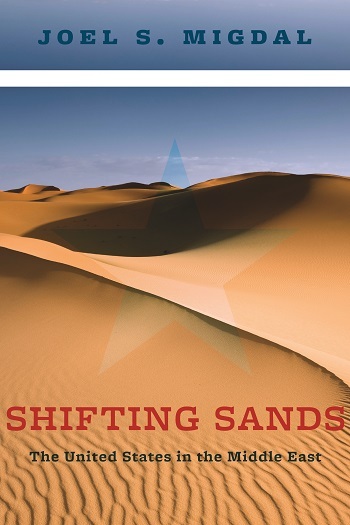 This week our featured book is Shifting Sands: The United States in the Middle East by Joel S. Migdal. Throughout the week, we will be featuring content about the book and its author on our blog as well as on our Twitter feed and our Facebook page. In today’s guest post, Joel Migdal discusses John Kerry’s surprisingly active tenure as Secretary of State.

Enter our book giveaway for a chance to win a free copy of Shifting Sands!

John Kerry has taken on as activist a foreign policy agenda as any secretary of state in recent memory. In the year or so that he has been in office, he has dived into thickets of crises on every continent and on a wide array of issues. Most recently, he derided climate-change deniers as akin to believers in a flat earth. He made his remarks in Indonesia on the heels of the first U.S. environmental agreement with China, with hints that more agreements with other countries were on the horizon. His assault on climate change—and those who do not take it seriously—came during an Asia tour in which he also directed tough words at North Korea, defending U.S. joint military exercises with South Korea. And, at the same time, he leaned hard on South Korea and Japan to repair their frayed ties.

Nowhere has Kerry been more aggressive than in the turbulent Middle East. He has been out front simultaneously on three sets of talks—to end the brutal war in Syria, move Iran away from the development of nuclear weapons, and solve the seemingly interminable Palestinian-Israeli conflict. Any one of these negotiations would have provided him with a full plate. When he came into office a year ago, no one would have bet that any of these initiatives could succeed and, even now, few would bank on more than one of these actually showing results. But Kerry has not been shy about tilting at windmills.

What is even more remarkable about Kerry’s mad-paced activism is that it came just as the United States seemed to be retreating from the world stage. The numbers of US troops abroad, for example, shrank from more than a million in the early decades of the Cold War to just over 200,000 today, with those numbers due to plummet even lower as United States involvement in Afghanistan tapers off. The wars in Afghanistan and Iraq spiked the numbers of troops abroad in the wake of 9/11, with around 160,000 in Iraq alone during the “surge,” and with 60,000 still in Afghanistan. But with the near-total withdrawal from Iraq and U.S. military deployment in Afghanistan slated to be slashed to a fraction of what it is today—and possibly even to zero if Hamad Karzai does not sign the negotiated agreement with the United States—troop levels worldwide may go as low as around 170,000, lower than at any time since World War II. Today, U.S. military spending as a percentage of GDP is about half what it was at the peak of the Cold War.

Of course, all this is not to say that the United States has a negligible military presence abroad today. It still supplies around 40 percent of arms worldwide and accounts for about the same percentage of the world’s military spending. And, while it is hard to say precisely how many military bases the U.S. maintains abroad, the number is upwards of 600 and probably closer to 900.

But the end of the Iraq War and the impending drawdown in Afghanistan have shrunk the country’s military muscle abroad. And, even in the realm of what International Relations experts call “soft power,” there has been a clear slackening off of foreign influence since the battering of the United States economy began in 2007. The diminished international American presence has led to a crisis of confidence among leaders who depended heavily on the U.S. Most vocal in expressing their plight have been officials in Saudi Arabia and some Arab Gulf states, who have been eyeing Iran warily, but the perception of a U.S. pullback internationally is widely shared. The retreat of the United States is both an objective and subjective reality—reflected in hard numbers and in the minds of U.S. allies.

The Kerry Energizer Bunny is intended to counteract that reality in a number of ways. Kerry’s eagerness to insert himself into the watershed events in the Ukraine, relegate Latin America to “backyard” status, chastise Nigeria for its human rights abuses, inject himself in South Sudan’s internecine warfare, and, not least, tackle the problems of the Middle East hammers home the point that the United States is still the only country in the world that is an everyday player in every region of the world.

Beyond that, his activism aims at reestablishing negotiations as a cornerstone of U.S. policy. The centrality of negotiations in foreign policy may seem self-evident. But the George W. Bush administration’s open disdain for negotiations—especially with foes—demanded their active rehabilitation as a primary tool to exert U.S. influence abroad. The secretary of state has been eager to pursue talks not only in situations where the United States is a neutral actor shaping the framework and nudging the two sides, as in the case of Israel-Palestine. He has also pursued antagonists like Iran to sit down with him, apparently even before Hassan Rouhani assumed office in August of last year. Both sorts of negotiations, as a middleman and as a protagonist, involve a high risk/high payoff calculus. Kerry assumed the risks and seems to have concluded that, with military intervention mostly off the table for a war-weary America and regions like the Middle East vulnerable to catastrophic eruptions, U.S. influence can still be substantial—and beneficial—through an active role in high-stakes negotiations.

Finally, Kerry’s frenetic pace seems directed internally at the fragmentation of foreign-policymaking in Obama’s first administration. Obama’s earlier emissaries to sites of conflict and crisis (what I call in Shifting Sands his All-Star Team) included high-profile luminaries, including Richard Holbrooke, George Mitchell, Dennis Ross, Christopher Hill, David Petraeus, Stanley McCrystal, even Vice-president Joe Biden. These men all had sparkling résumés in foreign affairs but did not always demonstrate an inclination to play nicely with others on the President’s team. At a time of military drawdown in Iraq, the scattered quality of American foreign policy further reduced its influence abroad. The Kerry whirlwind was aimed at both centralizing and coordinating the diverse facets of policy.

Kerry was unambiguous about his overall aims in a speech at the recent World Economic Forum in Davos where he declared that “far from disengaging, America is proud to be more engaged than ever.” The book is still open as to whether Kerry can go beyond engagement and help recapture the sort of influence the United States wielded in the post-World War II era. But if he is to succeed he is right in thinking that diplomacy, negotiations, and multi-faceted pressure, not raw might, will be the most effective tools to move forward. As he follows that tack, above all he will need the President to have his back when push comes to shove.