“Empower women and you enhance security in all its dimensions. Disempower women, and you undermine that security.”—Valerie Hudson 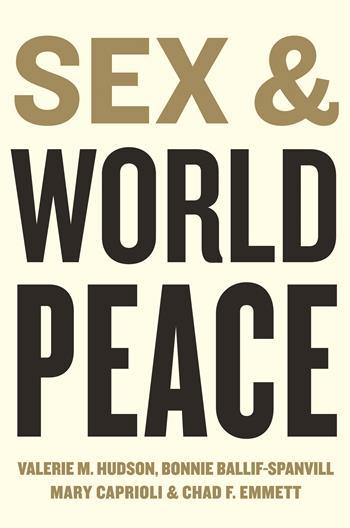 The following post if written by Valerie Hudson, co-author of Sex and World Peace.

My co-authors and I are very grateful that Gloria Steinem found Sex and World Peace to be an important read. How the insecurity of women creates insecurity for the broader collective, whether at the local, national, regional, or international levels, is a vital topic of concern not only to scholars, but to policymakers and policy advocates as well. In a very real way, whether we speak of food security, economic security, demographic security, security and governance, security and health, or any one of a numbers of interlocked aspects of collective security, women are the great pivot. Empower women and you enhance security in all its dimensions. Disempower women, and you undermine that security.

We are often asked what will follow Sex and World Peace and its initial efforts to demonstrate those linkages that are often invisible in our security discourse. To date, we are engaged in two research projects, one nearing completion and one just getting underway.

Scheduled for publication in June 2015 by Columbia University Press is the forthcoming volume, The Hillary Doctrine: Sex and American Foreign Policy. In that book, journalist Patricia Leidl and I examine how attention to the situation of women has become, in the words of former Secretary of State Hillary Clinton, “a cornerstone of our foreign policy.” Certainly women have not been seen as such until very recently. How as a nation did we come to the point where a Secretary of State could openly claim “the subjugation of women is a direct threat to the security of the United States”? We call this new understanding “The Hillary Doctrine” after its most eloquent exponent.

Furthermore, what then did the United States do, as a nation, to implement that vision through foreign policy? How did the White House, State Department, Defense, USAID, and other elements of the federal government craft policies and programming to attend to the Hillary Doctrine? And what was the result? What can we learn from the track record of successes and failures that would be of use to an incoming presidential administration?

In addition to that more policy-oriented work, we are also still engaged in good, old fashioned social science research. Four researchers associated with The WomanStats Project are currently working on a new endeavor funded by the Minerva Initiative of the U.S. Department of Defense. The Minerva Initiative was created by former Secretary of Defense Robert Gates, who saw the wisdom of creating lines of communication between scholars and practitioners on topics pertinent to national security.

Our three-year project is entitled, “Household Formation Systems, Marriage Markets, and Societal Stability/Resilience.” In every human society, arrangements are made for the production and socialization of a subsequent generation. In most societies, those tasks are accomplished by some form of socially sanctioned household formation mechanism, usually marriage between men and women. Involving the two halves of humanity dependent upon one another for reproduction, the customs and laws surrounding “marriage” between men and women may in fact constitute the foundational organizing principles of all human societies. As such, these principles would affect all other societal phenomena, including forms of political and economic organization, and the degree to which these are both stable and resilient.

For example, the historians and demographers have hypothesized that modern democracy and capitalism find their roots in the profound alteration of marriage patterns in northwestern Europe during the thirteenth and fourteenth centuries. Specifically, the eradication of polygyny, the impressive increase in marriage age for women, and the amelioration of patterns of patrilocality created a more companionate household governance structure. This new foundational structure became the training ground for participatory democracy. Likewise, the diminution of patrilocality not only encouraged, but actually required, a more entrepreneurial approach to economic affairs. This hypothesis encourages us to examine more closely the relationship between marriage patterns/markets and societal stability and resilience.

Our own research involves the examining the relationship between household formation systems and the resulting marriage markets produced, on the one hand, and state stability and resilience on the other. By the term “household formation system,” we mean the totality of demographic, legal, economic, and customary forces that influence the formation of reproductive unions between men and women. The custom of marriage creates a “market” of marriage-eligible men and women. How those markets are “cleared,” we argue, will have significant effects on societal stability.

For example, our previous research explores how in societies with highly abnormal sex ratios favoring males, such as found in China and India today (and in the past), up to 20 percent of young adult men may fail to form households. Given the logic of hypergyny, those who will not be able to form households will be those who are already alienated from society through lack of skills, economic resources, and illiteracy. Called “bare branches,” these disaffected young men, denied any stake in the future of their societies, have been major players in the insurrections and violence that have plagued these two civilizations over time. Obstructions in marriage markets, then, can complicate household formation strategies, which in turn may destabilize society.

In addition to the collection and analysis of data on marriage patterns cross-nationally, we will also be sending one of our team to West Africa (assuming the Ebola crisis passes) to examine the relationship between polygyny and recruitment into terrorist groups. Marriage markets become easily obstructed through prevalent polygyny, with young men again losing out to older men with the means to pay the brideprice for several wives. We hypothesize, for example, that the Liberian and Sierra Leonean insurgencies gained momentum by appealing to frustrated male youth who wanted to break the gerontocratic monopoly on the marriage market.

However, in neighboring Guinea, new polygamous unions were outlawed in 1968 and this law was enforced with heavy fines and lengthy prison sentences. Although Guinean elders still held a corner on political power, marriage markets should have become much more accessible under these circumstances. If the rebels had less success recruiting youth in the Guinean borderlands and monogamous enclaves in Sierra Leone and Liberia, this would give evidence in support of our theory linking household formation strategies, marriage markets, and stability/resilience.