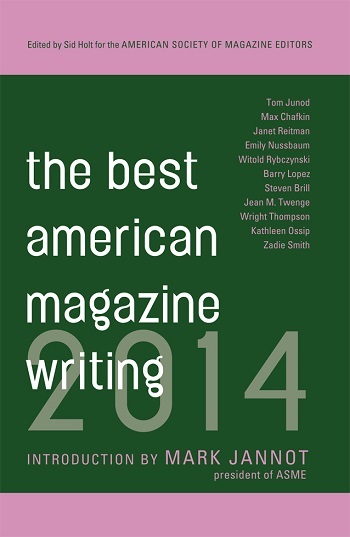 The Best American Magazine 2014 includes some of the best writing of the past year. As evident from the book’s contents, while the writing in magazines is perhaps as strong as ever, the magazine industry, as has been well documented, and the concept of what constitutes a magazine is in doubt.

The fate of the magazine as both a business model and a form was the topic of a recent story on Marketplace, which included an interview with Sid Holt, the editor of The Best American Magazine Writing 2014 and the chief executive of the American Society of Magazine Editors:

As the story reported, 2014 saw the launch of 800 new magazines. These new magazines represent a new niche-driven trend in the industry where publications such as Bacon, Eye-lash, or Skinny News are aimed at very specific audiences.

Sid Holt says it is a challenging time for magazines. While magazine audiences are growing online and on other digital platforms, the loss of advertising dollars that were once a mainstay of print has been hard to make up.

“Those digital dimes haven’t replaced those print dollars yet,” he says. But at the same time, he notes, magazines are adapting. In order for a magazine now to be successful it has to carry its shared passion between reader and publisher — be it guinea pigs or eyelashes — across platforms.

The fate of the magazine and what makes magazine writing so distinctive was also the subject of Mark Jannot’s introduction to The Best American Magazine Writing 2014. In the introduction, he considers how particular magazines develop pieces that are not only compelling in their own right but fit the style and ambitions of their publication: