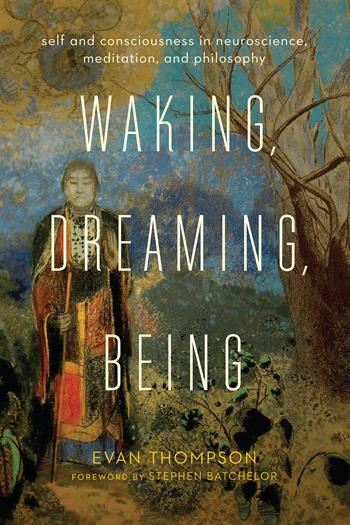 In today’s post, we are happy to present excerpts from astrophysicist Adam Frank’s recent New York Times book review of Evan Thompson’s excellent new comprehensive look at cognitive science, Buddhism, and the self, Waking, Dreaming, Being: Self and Consciousness in Neuroscience, Meditation, and Philosophy:

In the endless public wars between science and religion, Buddhism has mostly been given a pass. The genesis of this cultural tolerance began with the idea, popular in the 1970s, that Buddhism was somehow in harmony with the frontiers of quantum physics. While the silliness of “quantum spirituality” is apparent enough these days, the possibility that Eastern traditions might have something to say to science did not disappear. Instead, a more natural locus for that encounter was found in the study of the mind. Spurred by the Dalai Lama’s remarkable engagement with scientists, interest in Buddhist attitudes toward the study of the mind has grown steadily.

But within the Dalai Lama’s cheerful embrace lies a quandary whose resolution could shake either tradition to its core: the true relationship between our material brains and our decidedly nonmaterial minds. More than evolution, more than inexhaustible arguments over God’s existence, the real fault line between science and religion runs through the nature of consciousness. Carefully unpacking that contentious question, and exploring what Buddhism offers its investigation, is the subject of Evan Thompson’s new book, “Waking, Dreaming, Being.”

A professor of philosophy at the University of British Columbia, Thompson is in a unique position to take up the challenge. In addition to a career built studying cognitive science’s approach to the mind, he is intimate with the long history of Buddhist and Vedic commentary on the mind too. He also happens to be the son of the maverick cultural historian William Irwin Thompson, whose Lindisfarne Association proposed the “study and realization of a new planetary culture” (a goal that reveals a lot about its strengths and weaknesses). Growing up in this environment, the younger Thompson managed to pick up an enthusiasm for non-Western philosophical traditions and a healthy skepticism for their spiritualist assumptions.

“Waking, Dreaming, Being” begins with an appreciation of neuroscience’s revolutionary impact on our understanding of the brain. Armed with high-resolution digital tools, researchers have mapped critical steps in cognition and vision, language and even memory.

The success of these studies, however, leads some to claim them as proof in favor of “neuro-reductionism” — the proposition that we’re all nothing but the goop of our brains. From this standpoint, minds are never more than just brain function. Once the working brain stops working, our consciousness ends, we end, end of story.

But for others, including Thompson, something essential is left out of this neuro-­reductionist account. The vividness of our experience is neither corralled nor exhausted by fM.R.I. maps or the traces of brain waves in an EEG. There is an “explanatory gap” hanging between neural activity and conscious experience. While that gap has led some philosophers, like Colin McGinn, to argue that consciousness is simply beyond scientific explanation, Thompson moves in a different direction. He begins by reminding us that long before Socrates, the philosopher-­meditators of northern India were already investigating consciousness and its dynamics. Almost 3,000 years ago, first Vedic and then Buddhist practitioners articulated sophisticated first-person accounts of cognitive function. Thompson argues that these contemplative practices are relentlessly empirical. “In the yogic traditions,” he writes, “meditation trains both the ability to sustain attention on a single object and the ability to be openly aware of the entire field of experience without selecting or suppressing anything that arises.”

Neuroscience considers dying to be nothing more than the ending of brain function, but Thompson argues forcefully that contemplative traditions still offer science a powerful new perspective. In Buddhism, rich and precise accounts are given of the mind’s dissolution in layers during dying, similar to what occurs while falling asleep. As hospice workers well know, the dying process can take hours or days. Thus a phenomenology of dying — meaning detailed first-person accounts by those trained to watch their own minds (including dying minds) — would be fertile territory for future neuroscientific studies. Speaking specifically about accounts of near-death experiences, Thompson presses a point that is often missed:

“What this means in pragmatic terms is to stop using accounts of these experiences to justify either neuro-reductionist or spiritualist agendas and instead take them seriously for what they truly are — narratives of first-person experience arising from circumstances that we will all in some way face.”

That quotation summarizes everything right about Thompson’s excellent book. Walking through the wreckage of a thousand atheism-versus-religion debates, he asks us to do something truly radical and withhold judgment on the big (perhaps unanswerable) metaphysical questions as we carry out our explorations. Instead, we can focus with honesty and integrity on where the empirical, experiential information actually lies. It’s there, he says, right before us, in the lives we inhabit.