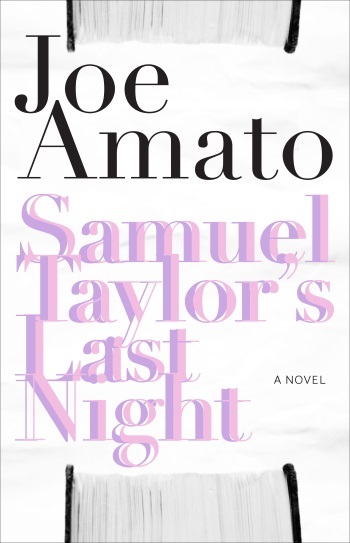 “[Samuel Taylor’s Last Night] has an appeal and an intensity to it that are both personal and cultural, both emotional and critical, and the images, insights, and considerations tarry with you, lending the book a marked, essayistic and moral dimension that calls for a slow digestion.” — Christian Moraru

We are proud to be distributing Dalkey Archive Press, one of the leading publishers of avant-garde fiction and literature in translation! Today’s Thursday Fiction Corner post features Joe Amato’s recently published novel, Samuel Taylor’s Last Night. Amato’s academic novel has been reviewed in both the Los Angeles Review of Books and Inside Higher Education. Read on for excerpts from both reviews, as well as a short excerpt from the novel itself!

In the LARB review, Christian Moraru explores the ways that the novel “is a text at war with itself”:

Samuel Taylor’s Last Night is a text at war with itself because the narrator S.T. is at war with himself, but on a deeper level, Joe Amato is staging, with humor and inventiveness, an agonistic poetics — an antipoetics in the best (anti)tradition of self-reflective surfiction and avant-pop parodic bricolage. As in Ronald Sukenick, Raymond Federman, Steve Katz, Curtis White, Mark Amerika, and Mark Leyner, this modus operandi speaks to a paradoxically clarifying “anti-transparency.” They all seek to debunk the pseudo-realistic, instrumentalist myth of writing as, in S.T.’s words, “a transparent medium through which a reader might be transported to untold representational or ideational coordinates.” The myth rests on a misconception perpetuated by lay audiences and “storyteller entertainers” alike, for whom “the telling of stories is not the primary aim” of storytelling. Instead, what matters to such “tribes,” S.T. says, is that language might take you beyond itself, to some “places foreign to the text itself.”

John Domini, writing at the IHE blog The Education of Oronte Churm, looks more closely at the novel’s examination of “the damage done by the Powers That Be”:

Getting to know the man, however, requires more hunting and pecking. One set of six lines develops a metaphor about bandwidth (which Taylor needs to change), and then a set of ten reflects on the region around Syracuse (where Taylor has “an old friend… writing about another old friend”). Still, the mosaic reveals, in time, a sympathetic complexity. A recent widower—the wife’s name, Nora, recalls Joyce —Taylor was born blue-collar during the Baby Boom, but he’s escaped grunt-work for an academic career that, while lengthy, has never achieved job security. The final chapter finds him once again a tenure-track candidate, decidedly unpromising, and as he delivers his presentation to the faculty, long since prepared of course, he sifts through his grief and hope, arriving finally at “what purpose might be better served” by his remaining energies.

That purpose, as in Dimock’s George Anderson, concerns the damage done by the Powers That Be. Amato’s protagonist has a vision of a “push-come-to-shove world,” with “catastrophic consequences of ordinary endeavors,” and this convinces him to abandon “erudite… shoptalk.” Hence, it’s Taylor’s last night.

Finally, after building up your anticipation with reviews, we are happy to present an excerpt from the novel itself!