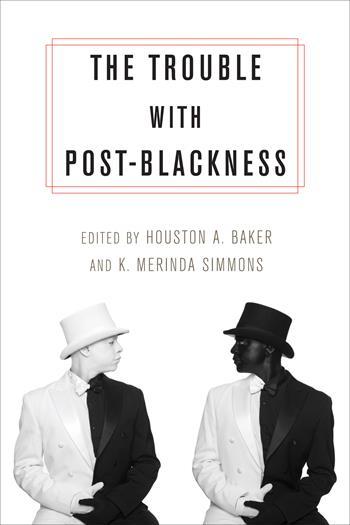 “To declare oneself “post-black” is essentially to demand of a radiant tradition that it stops talking, archiving, and producing knowledge and specific forms of art, sport, and knowledge spanning millennia.”—Houston Baker and K. Merinda Simmons

Throughout this week, we’ll be featuring books relating to Black History Month. In the following post, we interview Houston Baker and K. Merinda Simmons, the co-editors of The Trouble with Post-Blackness:

Question: Your book was prepared around the time of the Trayvon Martin shooting and it serves as a point of discourse several times throughout. Do you feel that the discussion would have been radically changed had it been prepared after the Michael Brown and Eric Garner murders?

Houston Baker and K. Merinda Simmons: I am not certain the temper of the brilliant essays and reflections collected in the book would have been radically changed. The galvanizing effects of the murder of Trayvon Martin were enough in themselves to set off a cacophony of anger and events not seen in United States and global activism for an extended stretch of time. It was as though the murder of Trayvon Martin was a horrific wake up call from the ambient, narcissistic sleep of “Post-Blackness” and excessive celebrations of the second Obama presidential election. If a trajectory of disillusionment with the euphoria of Barack Obama’s double presidency is drawn, surely its major break was the murder of Trayvon Martin. Every person’s death diminishes us all. This we know. The addition of recent murders of so many other African American men, women, and children in the United States—especially from within sanctioned institutional and authoritative structures such as the police—goes beyond diminishment to devastation. Post-Blackness’s self-regarding call to seize a putative American Dream “beyond blackness” seems delusional of course in light of the brutal deaths of so many.

Q: What do you believe the election of Obama means within the context of Black history? To what extent should we categorize it as a progressive milestone, versus a symbolic achievement during a lack of significant developments in the Black experience? For instance, how do we reconcile the post-election celebrations centered on racial progress, in light of recent events in which the notion of post-blackness seems to be suffering?

HB and KMS: This is a complex question because it articulates and juxtaposes a number of shorthand terms such as “progressive milestone” and “symbolic achievement.” Milestones are always only what we make of them in symbolic systems such as “Black history” and “development” discourse. The elections of Barack Obama to the United States presidency are permanent markers of a shifted American context of presidential politics. Obama’s successful bids for the presidency were full of centrist (as opposed to “progressive”), vague, and almost speechlessly exorbitant financing. “Blackness”—in the existential sense coded in a tradition of creative resistance, militant refusal of subjugation, and studied attention to black impoverishment—had nothing to do with the presidential victories of Barack Obama. However, in this long line of coded black resistance against insuperable odds, even a day off or a small lottery win from a vending machine in a supermarket can seem like miraculous good fortune. And if it has never happened before in one’s known history it seems like the Fourth of July! There were volumes of black critique, reservation, and resistance to even the notion that Barack Obama represented a “new black messiah” come to redeem the United States and rid it of racism and black despair. But such counter-celebratory critique was ineffective at producing in-depth perspectives on Obama the candidate or the resonant inefficacy for the black majority of his run up to the election.

Question: Some of your contributors evaluate post-Blackness through art and literature, including a poem by Emily Raboteau. How central to the experience and idea of post-Blackness do you find artistic expression to be?

HB and KMS: Arts and entertainment, in combination with sports and athletics, have been extraordinarily important access routes for self-definition, achievement, and national and international acknowledgement of black life and culture. The formal politics, education, law, religion, and everyday life of what Frederick Douglass denotes as a “soul killing” dominance of slavery in the mainland colonies of British North America made circuitous, improvisational routes of escape and achievement mandatory.

The fluidity of art and sport – with all their irony, signifying, symbolic, and physical grace beyond the reach of “slave reason” – provided nurturing zones for a distinctive black creativity. W. E. B. Du Bois, for example, posits the African American Sorrow Songs as the greatest gift of humankind to the world. The art of African American life is a foundational apprehension for the United States national project. This is incisively rendered in the lyrics of the anthem “Glory” by John Legend and Common as follows: “We sing, our music is the cuts that we bleed through.” The Harlem Renaissance and the Black Arts Movement are enduring sites of astute definitions of “blackness” that partisans of the “post” have attempted to write off as mere reactionary politics rather than enduring legacies of black genius. The aesthetic and rhetorical innovations of such legacies thus carry incisive critiques of the rhetoric and logic of post-blackness. They exemplify the ever-shifting registers of race-based ontologies and press us to think about “expressiveness” not as an outward manifestation of some intrinsic blackness but rather as an ongoing set of identifications that demonstrate the performativity of the notion of “blackness.”

Q: How should we understand the importance of gender in discussions of post-blackness? Does gender complicate post-blackness, and in what ways?

HB and KMS: The transatlantic slave trade was keen on dividing men from women aboard its ships of many nations. The disingenuous rationale for such division was that women captives were less prone to violent rebellion. Thus, they could be granted more onboard mobility. However, from a perspective truer to the motives of the slave ship, this gendered mobility of captive women was promoted along the axis of “biological” sex and captive women on shipboard were subjected to sexual exploitation. The double burden of slave women’s labors was constituted by their outdoor and indoor subjection to sexual assault and rape.

Black women are defined in Thomas Jefferson’s Notes on the State of Virginia as bestial in both sex and gender. Jefferson speaks of black women’s ardor as not “love,” but bestiality akin to that of the orangutan. One might speak, therefore, of the “great divide” fomented between African American men and Women as, at least, a function of the slave ship’s armed barricades and the lust and inscribed hypocrisies of slavers and white founding fathers of America.

The swerve of United States’ cultural habits of attention, organizational structures, and womanist activism in recent decades have all offered powerful refutations of historical sex and gender fallacies. There is actually nothing “post” about this swerve. It is very much part of a social, activist, and preeminent blackness, historically rooted. One of the oversights of Touré’s text, indeed, is its inattention to gender politics as they necessarily intersect with conceptions of blackness and racial discourse. Touré instead chooses to promote a sweeping “Americanness” that collapses difference even as he purports to celebrate it. In his broad praise of what he sees as the possibilities of the American democratic project, Touré ignores the ways in which that nationalistic impulse is predicated upon a masculinist starting point.

Q: Professor Simmons’s introduction briefly discusses the problems with focusing too much on “real world” issues, however it is these policies that are most often discussed and understood by the nonacademic public. How do you recommend incorporating some of the “abstract” interventions undertaken by your volume?

HB and KMS: We do not grant the intellectual premise of a distinction between a “real world out there” and an ostensibly more abstract academic context. Academic texts that are jargon-laden or inaccessible do not exhibit such traits because they are academic but because they are examples of bad writing. Ideas have consequences. With that in mind, the problem discussed in the Introduction is not a focus on so-called “real world issues” but is instead the suggestion that there can be easy boundaries drawn around (and, implicitly, various amounts of privilege granted to) any particular mode of experience—be it activist, scholarly, or otherwise.

The essays in our volume are examples of stellar academic writing inasmuch as they present pressing questions of the domains of violence experienced daily by people of color—political, physical, psychological, and otherwise—with a discerning self-reflexiveness regarding their own positions (as scholars, creative writers, journalists, etc.) in relation to that violence. The absence of critical self-awareness of “positionalities” is precisely what far too often results in the failure of scholars to employ clarifying intellectual strategies. One thinks immediately here of the brilliant work that has been accomplished regarding “race” deployed as a rhetorical tool. The rhetorical is of course quintessentially joined at the hip with what we often too easily define as “real” or “real world experience.” The failure to recognize and acknowledge the “jointness” of rhetoric and experience is precisely what keeps the dichotomy of experience versus theory up and running in the first place.

Q: You describe your book as a multiperspectival conversation; do you believe this is a conversation with a definitive conclusion?

HB and KMS: At their finest, conversations are charged, energized by emerging consensus and dissent, and productive of new perspectives and knowledge. They are comprehensive, collective, and consequential. The best conversations require interlocutors who are dutifully unwilling to close the door on the past and declare themselves buoyantly “over all that” in their individual genius. Hence, to declare oneself “post-black” is essentially to demand of a radiant tradition that it stops talking, archiving, and producing knowledge and specific forms of art, sport, and knowledge spanning millennia. Multiperspectivity does not aspire toward a sense of an ending but rather endlessly strives to make the changing same of blackness more profoundly effective.