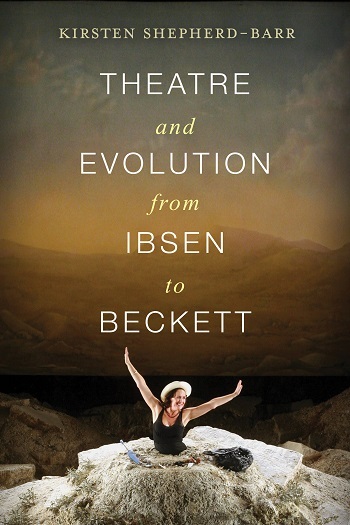 The following is an interview with Kirsten Shepherd-Barr, author of Theatre and Evolution from Ibsen to Beckett:

Kirsten Shepherd-Barr: I had written about it before for my book Science on Stage in 2006, where I devoted each chapter to an area of science, such as physics, evolution, math, medicine, etc. After I finished it, the chapter I really wanted to pursue in a lot more depth was the one on evolution. Then around 2009 everyone was gearing up for the 150th anniversary of On the Origin of Species and Darwin’s 200th birthday so there was this massive worldwide interest in Darwin. I was asked to do a panel on “Darwin and the Theater” for the International Darwin Festival in Cambridge. I brought together two playwrights and a neuroscientist who had been a theater director earlier in his career. I did a lot of research for the panel and it revealed to me how much there was to still delve into. And the other piece of the puzzle was that I had come across fantastically interesting books on Darwin and the novel, but nothing on Darwin and drama. It struck me that there was so much to say about theater and evolution and it became very clear to me that it was going to go way beyond Darwin. It’s not just a 19th century phenomenon, either; it’s looking over the past 200 years at evolutionary theory’s development.

At the festival in Cambridge, there was a wonderful exhibition on Darwin and the visual arts. They had mounted these huge canvases by famous painters of wildlife and scenes of survival and great drama in the natural world. There was a kind of underlying message there, a more oblique engagement with Darwin, not necessarily obvious, but doing it in a more subtle way. You have to sniff it out. It’s not necessarily going to be this overt reference to Darwin. It’s about the texture of the play rather than the direct references.

Q: What does theatre specifically ask from evolution that establishes a relationship different from other art forms?

KSB: The number one thing that struck me in the broader field in literature and science is that generally there is a sense that George Eliot, Thomas Hardy, and other novelists of the time had a real understanding of Darwin’s work and incorporated it in a more or less positive way. There is almost the opposite reaction in theater. The plays I was studying tended to be questioning. There was much more probing skepticism going on. Why would that be? Theater is a live art form. And the potential there in terms of evolution is just so great. You’re putting a human body on stage, a physical signifier of evolution. When you stick an actor on stage you’re signaling physiological processes that all humans have in common. You have an evolutionary process in front of you. Evolution is such a long-term 19th century spectacle, you have these huge dramatic scenes, waterfalls on stage even, and they are all part of a larger process.

In many ways my real starting point is the discoveries of Lyell, whose work Darwin was reading during his voyage on the Beagle, seeing the things he’s reading about. He is absorbing this concept of deep time and is then incorporating that as he formulates his own evolutionary ideas. The connection is this idea of the spectacle, particularly seen in British theaters in the mid-19th century, where effects, machinery, sophisticated and ambitious stagings, displaying natural settings like waterfalls, are pointing to what’s going on in the sciences, telling us the earth is much older than we thought. There really has to be a connection there, it’s not a coincidence.

Q: You write that it is easy to forget how central theatre once was, that it was once deemed so threatening that it prompted censorship laws in Britain until 1968. What do you have to say about theatre today, and how it reflects upon evolution?

KSB: Climate change is probably the biggest evolution-related issue for theater but there’s been quite a delay; only since around 2008 have plays been produced that deal with it overtly. I would love to see more work in the theatre on this and on epigenetics. What has happened in terms of our understanding of genetics? What is heritable? What can be passed on? We don’t know all the answers but I think that’s part of what theater jumps on. The third area would be reproduction. How do we talk about reproduction now in light of all the technology we have that has the potential to change how we reproduce and also change the results? There are also ongoing questions like are we innately cooperative? What is it that drives evolution? Theater is only starting to engage with these things, confined by its liveness to temporal and spatial here-and-now experience. How can you stage these things? This is a very exciting question and challenge.

A contemporary playwright I enjoy is Steve Waters. His 2009 play The Contingency Plan takes you to a coastal house in England that is under threat of climate change. Waters doesn’t rely on special effects or fancy technical things. He’s got brilliant dialogue, incredibly witty and fast-paced. Looking at the personal and public imagination, where his character can read the writing on the wall and sees that the house will be submerged and the coastal area wiped out, the play speaks with accuracy about the current political landscape, political agendas, massaging of data, and all other kinds of hurdles. The climatologist father has built a little model that represents what will happen, a microcosm that shows devastation, a flood, so the audience can watch in horror and then extrapolate and imagine the effects on the larger scale. It has that combination of actually staging very little and leaving the rest to the audience’s imagination. It’s the same principle as Henry V where Shakespeare asks us to imagine the fields of France in “this wood O” of the Globe Theatre. Or like Brecht’s Galileo when he demonstrates the heliocentric theory for his student and the audience using just a few chairs and other props.

Q: You engage us with a wide variety of playwrights and theatre. Is there a particular relic of the stage that is central to the inspiration of your book?

KSB: There were two playwrights I was really surprised to discover: James A. Herne and Hubert Henry Davies. Davies wrote two plays that revolve around evolutionary themes, The Mollusc and Doormats. He is writing in the Edwardian period, while Herne is the late 19th century. They are completely different. Herne is pre-Mendel and Davies is post-Mendel, though obviously neither would label themselves as such. Davies is clearly interested in genetics, a field that was gaining ground at this time and was very high profile, and he was pretty successful in his time even though he is fairly well forgotten now. He takes an animal like a mollusk and he makes his female character behave like one: she seems completely lazy and inert, but something is happening underneath; constant biological processes are going on, there is a tension between visible and nonvisible and the play is essentially exploring how we read an organism. Herne is also really delightful. He might not always get his evolutionary theory right but he’s still able to do something fascinating with this idea of progressive evolution, and one of his plays, Margaret Fleming, took big risks in its exploration of motherhood by depicting breastfeeding on stage, which shocked people at the time.

Q: The introduction of your book attempts to establish a line between theatre’s relationship with evolution beyond what is inherently evolutionary in all arts. Can you discuss this line more and to what extent do you believe evolutionary biology is inevitably involved in all types of human creations?

KSB: I wanted to distance myself from literary Darwinism which poses literary forms as evolving organisms and as explicable through a biological process as well as thinking of art as just another mechanism of evolution; art in the service of science, in a way. The notion that all art forms are simply in the service of adaptation, to help us evolve, doesn’t hold up in terms of theater, for instance, which very often can be self-annihilating. How do you explain something like avant-garde theater as a survival strategy? It would have been deliberately a failure in the sense of mainstream popular drama. It doesn’t seem to be going along with this idea that art is going forward together to a more perfect form. It doesn’t fit into that progressive model.