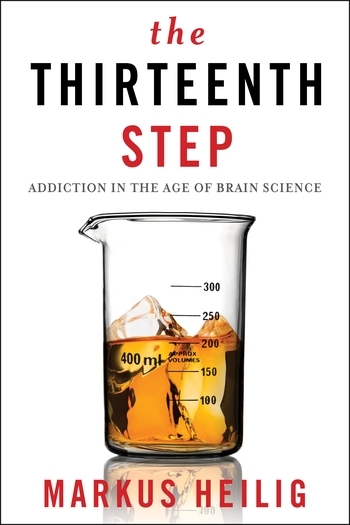 “Here’s a dream: A future in which every patient with alcohol problems, man or women, is thoroughly evaluated for PTSD, treated with evidence based behavioral interventions, and given the opportunity to benefit from synergistic effects of psychotherapy and pharmacology. Wouldn’t that be something?” — Markus Heilig

This week our featured book is The Thirteenth Step: Addiction in the Age of Brain Science, by Markus Heilig. In today’s post, Heilig discusses the deep connection between PTSD and substance addiction which scientists are still trying to fully understand.

And don’t forget to enter our book giveaway of The Thirteenth Step!

PTSD and addiction
By Markus Heilig

The public is clearly waking up to the fact that much of the toll of PTDS comes from substance use. Hard drinking may appear as the only way to temporarily escape the intrusive memories of traumatic events, face people at the grocery store, or fall asleep without the torment of nightmares. Up to 75% of combat veterans with PTSD also have alcohol problems. Conversely, between a third and half of patients seeking treatment for alcohol problems have PTSD.

But here’s something else to think about: The vast majority of PTSD patients are actually not veterans of wars. Firefights or explosive devices are not the most common causes of PTSD. Rape, sexual assault, or intimate partner violence are. Even with the recent wars, PTSD is twice as common among women as it is among men, affecting 8 – 16% of adult females in the US. Yet women suffering from PTSD are not much talked about. When they seek treatment for alcohol problems, the questions that would allow a PTSD diagnosis to be made are rarely asked. And even if the diagnosis is obvious, people look the other way. Traumatic events are so hard to talk about. Excuses are plentiful. Maybe bringing back traumatic memories will trigger cravings and relapse? So this difficult material is left for a “later” that never comes.

The links between psychiatric illness and addiction are often complicated, but not in this case. We can easily reproduce the connection between PTSD and addiction in the laboratory. When our patients are re-told their own trauma stories, they unsurprisingly experience intense anxiety. A less obvious consequence: They also have intense cravings for alcohol. In a nutshell, the negative emotions of PTSD drive alcohol seeking. The vicious circle is completed by the fact that alcohol use in turn promotes PTSD symptoms. Over time, it pushes into overdrive the same brain fear and stress systems that are already hyperactive in PTSD. This further increases the reactivity of fear circuitry, and promotes an even stronger urge to drink.

It is not only that coordinated treatments for both conditions are needed. Treatments also need to take in account differences between men and women. An example: PTSD is often thought to be related to a single, unique trauma – a bomb blast, or a car crash. This is often true in men. But in women, cumulative consequences of multiple traumatic events are just as common. Childhood adversity also seems to play a greater role in making women vulnerable to trauma in adulthood. Sexual and emotional abuse, to which girls are much more commonly exposed, are particularly powerful in their ability to put people at risk for PTSD later on. Years ago, my then student Åsa Magnusson of the Karolinska Institute in Sweden personally interviewed some 200 treatment seeking women with alcoholism. We learned that over a third of them had PTSD that had almost never had received any attention. But we also learned that we had to stop asking about “the trauma”. These women had more stories to tell than we could have imagined.

Neuroscience is at least beginning to get a handle on the PTSD part. At its core, it is perhaps best viewed as a disease of learning and memory. Normally, when things that used to signal danger no longer do that, people stop reacting to them as threats. Classical work by Joe LeDoux of NYU and others have shown that this process, extinction, is not one of simply forgetting. Instead, it is one that involves new learning, which overlays and overrides the old fears with new knowledge: “This situation is safe now”. For reasons neuroscientists still struggle to understand, traumatic memories are unusually hard to extinguish. And we don’t yet have any idea why early life adversity would make people more vulnerable to laying down these hard-to-unlearn memory traces in adulthood.

Once we figure out these molecular mechanisms, new treatments will hopefully follow. But for now, we can help PTSD patients benefit from what capacity for extinction they still have. These patients understandably tend to avoiding anything that brings back their painful memories. But this also eliminates the opportunities to re-learn. The best documented PTSD treatment is a behavioral therapy that helps patients with extinction learning. Developed by psychologist Edna Foa at Univ. of Pennsylvania, this “prolonged exposure therapy” systematically evokes traumatic memories, and exposes the patient to them until extinction occurs. Applying these principles, Foa has been able to achieve impressive results, including a tremendously successful treatment program for rape victims. I really wish more patients had a chance to receive this treatment.

But the big challenge is to figure out ways of treating PTSD and substance use in a concerted fashion. Kathleen Brady, Sudi Back and their team at the Medical University of South Carolina have come a long way towards that goal, working off principles established by Foa. This group developed an “Exposure Therapy for Co-morbid PTSD and Substance Use Disorder” (or “COPE” for short) that seems quite promising. In a landmark 2012 study, COPE produced significant improvements of PTSD symptoms in patients with co-morbid substance use disorders. Notably, about two thirds of patients in the study were women. Importantly, exposure to trauma memories in this study did NOT make patients relapse. So no more excuses for not providing PTSD treatment to patients with co-morbid substance use problems.

Not even these state-of-the-art behavioral treatments are effective enough, though. My guess is that new medications will be needed to better help patients with PTSD and addictions. A particularly attractive idea is that medication could enhance the effects of behavioral treatment. Beautiful work by my colleague Andrew Holmes at the National Institutes of Health suggests a possible approach to this. The brain has cannabinoid (CB) receptors that may be best known for being hijacked by marihuana, but are otherwise critical for many normal brain processes. Guess what: One of these normal processes is to promote extinction of fear memories. In fact, when a mouse was first genetically engineered to lack the main CB receptor in the brain, the most striking observation was that it could never unlearn fear memories. Strengthening the brain’s own cannabinoid system has great potential to strengthen extinction of fear in alcoholics with PTSD. Non-addictive medications with an ability to strengthen the body’s own cannabinoid signals exist already, developed with other conditions in mind. This makes it possible to test these mouse ideas in people. My former student Åsa is just about to do that in Sweden.

Here’s a dream: A future in which every patient with alcohol problems, man or women, is thoroughly evaluated for PTSD, treated with evidence based behavioral interventions, and given the opportunity to benefit from synergistic effects of psychotherapy and pharmacology. Wouldn’t that be something?