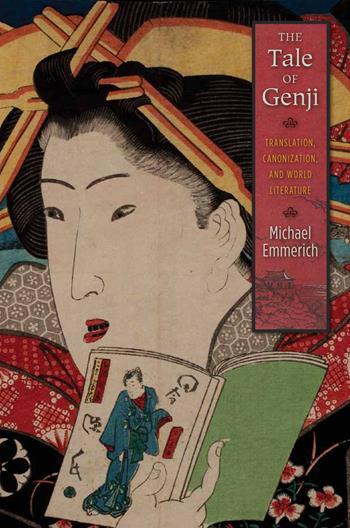 For this week’s fiction corner we look at what is considered by many to be the world’s first novel. The following is an interview with Michael Emmerich, author of The Tale of Genji: Translation, Canonization, and World Literature now available in paper.In the interview, Emmerich discusses, among other subjects, how The Tale of Genji became a classic of Japanese literature, how it changed reading habits, its place in world literature, and his first experience with the novel:

Question: We tend to think of The Tale of Genji as a kind of immortal classic but in fact its history is more complicated. How did it become a national classic or emblematic of Japanese culture and literature?

Michael Emmerich: Genji was written in the early eleventh century, so of course the story of how it achieved its present status as one of the preeminent classics of both national and world literature is very long—a millennium long, in fact—and very complex. I argue that while Genji came to be regarded as a “treasure” very early on at an elite level, ordinary readers had little or no interest in the tale until surprisingly recently. The work that first managed to interest a truly popular readership in Genji—if only indirectly—was a sort of early modern graphic novel called A Fraudulent Murasaki’s Bumpkin Genji that was published over the course of thirteen years, from 1829 to 1842. The way I see it, Bumpkin Genji was crucial because it inspired for the first time in a popular readership the desire to know more about Genji, and then offered itself up as an enjoyable means of satisfying that desire, without actually having to read Genji itself. In other words, Bumpkin Genji popularized the notion of the complete translation of Genji into vernacular Japanese. Then, almost exactly a century later, from 1939 to 1941, the novelist Tanizaki Jun’ichirō published a translation into the Japanese of his day that became a best-seller. That was when Genji really came to be re-canonized not just as a celebrated but unread “treasure,” but as a “national classic” in the sense of “a classic of the Japanese people”—as a work for which, and to which, Japan and its citizens were somehow responsible.

Q: What has been the role of The Tale of Genji in the popularization of Japanese literature in English?

ME: Scholars have long recognized the importance of Arthur Waley’s translation of the tale, The Tale of Genji, which was issues in six volumes from 1925 to 1933. Waley’s version was widely read, and was praised by reviewers from the time its first volume appeared as one of the great works of world literature. In my book, though, I explore the role an earlier partial translation that has now been largely forgotten played in making Genji known—though less as a literary classic than as a portrait of eleventh-century Japan, and as a work by a woman writer. This translation, published in England in 1882, was done by a young Japanese named Suematsu Kenchō. At the time, the publication of a work translated from Japanese was such a rarity that it was actually considered newsworthy, and the notion that women writers had played such a crucial role in creating what is now known as classical Japanese literature made its appearance even more sensational. It’s hard to say how much of an effect the attention Genji garnered, first in 1882, then in 1925, then in 1976 with the publication of Seidensticker’s translation, and again in 2001 when Royall Tyler’s appeared, has had in popularizing Japanese literature more broadly, but I do think it has helped give people an image of Japanese literature as something worth paying attention to.

Q: How has the reception of The Tale of the Genji changed over time?

ME: To tell the truth, I’m somewhat skeptical of the notion of “reception.” In the case of Genji, hardly anyone reads it in the original classical Japanese these days, and even fewer people read it in the form in which it was originally circulated—in calligraphic manuscript rather than typeset book. Instead, most people come into contact with Genji through what I call “replacements.” Translations are perhaps the paradigmatic form of replacement, but there are all kinds of other replacements, too: digests, guides, movies, manga, artworks, designs on kimono. So many people have created so many different kinds of replacements of the tale over the millennium since it first appeared that it would take a book even to begin to explore the trajectory they have followed—as it happens, Columbia University Press has published just such a book: Envisioning the Tale of Genji, edited by Haruo Shirane—but I think one might at least say that, over the centuries, the forms Genji’s replacements take have moved further and further away from the forms in which it was first circulated.

Q: In what ways did the novel introduce new modes of reading in Japan?

ME: The way I see it, Genji didn’t so much introduce new modes of reading as serve as the site for the development of new modes of reading. This is true both of the classical Japanese text and of its replacements. Around the time Suematsu’s translation was published, it was quite common in Japan for people to regard Genji as a historical source, as a “romance” that offered a portrait of elite society at a certain point in Japan’s history, rather than as a great work of literature—certainly not as a “novel.” When Tanizaki began publishing his translation in 1939, he explicitly stated in his introduction that he wanted people to read it the way they would read any other novel. Rather than transforming the way people read in a straightforward, unidirectional manner, Genji’s almost continual replacement over the centuries created a sort of feedback loop, in which people’s changing tastes and notions of “literature” influenced their approach to Genji, which in turn influenced their tastes and notions of “literature.”

Q: What has been the novel’s relationship to changing technologies in books in printing?

Originally, Genji circulated in the form of hand-copied, calligraphic manuscripts. It was first printed—from woodblocks—only in the early seventeenth century, and the first typeset editions appeared in 1890. The different technologies used really had an enormous impact on the ways in which Genji was replaced: copying out the fifty-four chapters by hand was such an expensive proposition that it naturally limited the circulation of the tale to elites; woodblock printing helped bring the tale to a somewhat larger audience, and also made it very easy, and relatively cheap, to include images along with the text. Earlier I mentioned a sort of early modern graphic novel called A Fraudulent Murasaki’s Bumpkin Genji that helped get ordinary readers of popular fiction interested in Genji. This book had pictures on every page, with the text written into the blank spaces. I spend a lot of time in The Tale of Genji: Translation, Canonization, and World Literature looking at what I call “image-text-book relations” in this bestselling work, which is absolutely one of the most visually sophisticated books ever created in Japan, and I argue that to a large extent this incredible sophistication—which is to say, the book’s exploitation of the possibilities of woodblock printing—that made it a bestseller. Maybe we could think of the history of the replacement of Genji as being something like a stream that flows through different technological forms, different kinds of printing and binding, expanding to fill each one. Genji has come to be regarded as a novel in part, I think, because it is now printed in the form of a novel: as a typeset, case-bound book. Genji doesn’t look as much like a novel when you read it in an early modern woodblock-printed edition, or in a facsimile of a hand-copied manuscript.

Q: How does the novel’s changing status over time reflect notions of world literature?

ME: The notion of the “scholar-translator” has been much maligned over the past few decades, at least in the context of Japanese literary studies, but that is what I consider myself. As I see it, there are certain kinds of knowledge that one can only obtain through an immersion, a deep immersion, in the practice of translation. Translation is like the scientist’s lab. You go in there, you experiment, and you come away with knowledge you couldn’t have gotten in any other way. At the same time, if one is working, as I am, in a context that is foreign to the texts about which one writes—I am based in California, but I write about Japanese literature—one has inevitably to translate an awful lot just to make one’s arguments. All the scholarship that has ever been done in English on Japanese literature is shot through with translation. Our inevitable engagement with translation is perhaps the only thing that unites scholars of Japanese literature working in an English-language context. For a long time—since the rise of critical theory—many scholars have tried to disavow the fact that they are translators as well as scholars. I don’t do that. I see the fact that we are deeply, inextricably implicated in translation as one of our greatest strengths.

Q: Finally, on a more personal note, what was your own first reaction to reading The Tale of Genji both as a reader or a scholar.

ME: I first read Waley’s translation of Genji as an undergraduate in a class taught by the late Richard Okada, and I remember thinking it was very long. We had to read the whole thing in two weeks. But I also remember being blow away by how nuanced it was, and by the subtlety with which it treats extraordinarily scandalous matters. Above all, I remember thinking “Wow, I have to read this book again.” And I have. Again and again and again. If anyone reading these words hasn’t yet read Genji, go buy it tomorrow. You never know when you might be hit by a truck as you cross the street, and this is one book you want to read—at least twice—before you die.