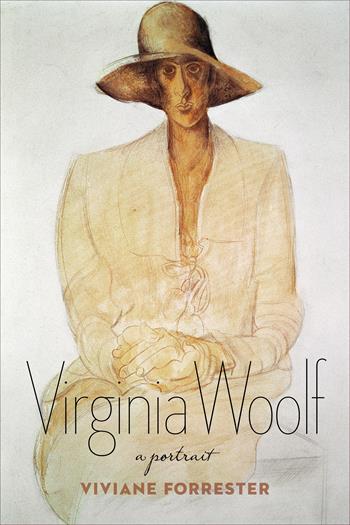 As Anne Fernald suggests in her very thoughtful review of Virginia Woolf: A Portrait, by Viviane Forrester, we don’t suffer from a lack of books on or biographies of Virginia Woolf. However, Forrester’s work, which won the Prix Goncourt award for biography, in its distinct approach to Woolf’s life does offer something new and important in our understanding of Woolf’s life and work. Fernald writes:

[Virginia Woolf] offers unexpected insights and useful challenges to settled ideas about Woolf, her friendships, her marriage, and her imagination. Progressing in sections through five key relationships in Woolf’s life—her husband, her family of origin, her sister Vanessa Bell and Bloomsbury, other writers, and death itself…. Bad or lazy biographers draw straight lines, linking historical figures to fictional characters. Forrester never does that. Instead, she shows patterns of imagery, suggestive links, taking up seldom-quoted diary entries and juxtaposing them against less-familiar passages from the novels to illuminate something that, at its best, seems both fresh and apt.

Much like her subject, Forrester’s own life was both accomplished and complicated. As Fernald writes, these similarities color and strengthen Forrester’s book:

In short, Forrester’s life contained many of the key elements of Woolf’s, but arranged differently: haute-bourgeois family, close acquaintance with painters (a husband, a sister), intellectual background, a mixed Jewish-Protestant marriage that saw strains but endured, and suicide. These personal connections, these experiences, similar but different, add poignancy and authority to her several meditations on living in an atmosphere of anti-Semitism, the artist’s life, and the complex factors that lead to suicide.

Recognizing that the French approach to biography and criticism differs from the Anglo-American tradition, Fernald argues that Forrester’s work allows us a new way of imagining Woolf:

Forrester is particularly good at drawing apt, intuitive connections that offer genuine psychological insights. For the most part, these connections are essayistic rather than scholarly, emerging out of a French tradition of thinking deeply on a subject and allowing metaphoric connections to hold rhetorical weight. While these observations contrast with the more dogged, literal style of Anglo-American documentation, they nonetheless offer us a way of imagining Virginia Woolf.