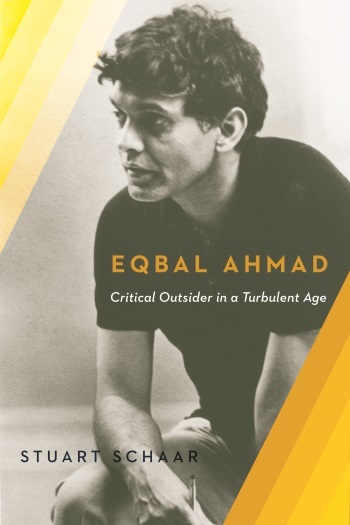 “Eqbal was a quirky, seminal thinker and analyst of global foreign policy. He understood and described correctly the catastrophies that would follow if the US invaded Iraq and toppled Saddam Hussein. He had met Osama bin Laden in Afghanistan in the early 1980s and predicted early on that the man would become a major enemy of the US once the Soviets were defeated.” — Stuart Schaar

For the second half of this week, our featured book is Eqbal Ahmad: Critical Outsider in a Turbulent Age, by Stuart Schaar. In the final post of the feature, we are happy to present an article by Schaar telling a number of poignant stories about Schaar’s relationship with Eqbal Ahmad and about Ahmad’s life as an activist and seminal political thinker, originally published at Juan Cole’s Informed Comment blog.

Don’t forget to enter our book giveaway for a chance to win a free copy of Eqbal Ahmad!

A Guru for Our Time: Eqbal Ahmad and the Life of Dissent from Empire
By Stuart Schaar

In the early 1960s I was living in Rabat while researching my doctoral dissertation for Princeton University. My friend, the Pakistani Eqbal Ahmad (d. 1999), who was living in Tunisia and also researching his dissertation, had just driven through Algeria as the Algerians celebrated their victory over France and gained their independence. Eqbal was euphoric after having shared celebrations with the Algerians whom he met along the way. We immediately set out for southern Morocco and the walled Saharan towns south of Marrakech.

Along the route we stopped at a town where everyone was blind. They were victims of trachoma, a fly-borne disease. I remember Eqbal biting his lower lip and bursting out in tears at the sight of people who greeted us with outstretched arms begging us to help them. We were activists and were used to organizing solutions for problems. This time, we felt absolutely helpless. Years later we learned that the World Health Organization began solving the problem of blindness in the Moroccan south, by distributing lime powder to peasants who lined the walls in the rooms under their houses, where they kept their animals, and in that way kept away infected flies.

I left this story, and several other poignant ones, out of my new book, Eqbal Ahmad: Critical Outsider in a Turbulent Age just published by Columbia University Press. Instead I concentrated on his ideas and the reasons why we should remember and read him still. Eqbal was a quirky, seminal thinker and analyst of global foreign policy. He understood and described correctly the catastrophies that would follow if the US invaded Iraq and toppled Saddam Hussein. He had met Osama bin Laden in Afghanistan in the early 1980s and predicted early on that the man would become a major enemy of the US once the Soviets were defeated.

After meeting Ayatollah Roholla Khmeini in his Paris exile and visiting Iran after its revolution, communicating in Persian he saw clearly that the theocratic state would deny its population real democracy. He tore apart the new US paradigm of anti-terrorism as the major theme of its foreign policy, and described its inconsistencies. With his close friend Edward W. Said by his side, he met with Palestinian leaders in the early 1980s and told them that they could never defeat the Israelis using conventional weapons. Instead he recommended their organizing a massive campaign of civil disobedience following in the footsteps of Gandhi entailing millions of Palestinians marching into Israel to reclaim their land.

He also saw the Cold War from the vantage point of its Third World victims and drew attention to the some 21 million people in Africa and Asia who lost their lives in proxy wars fought in the shadow of the Cold War. For him, the post-war period was better defined by wars of independence and insurgency against the remnants of the imperial age. In all cases, he saw the future before anyone else did and left a poignant record which differed from mainstream analysis.

At the end of his life, when he returned to Pakistan, four million people weekly read his newspaper column in the English language newspaper Dawn. He became a peace activist between India and Pakistan and organized people’s exchanges between these enemies. He also actively opposed the nuclearization of the Indian sub-continent. His dream of establishing a first class liberal arts college in Islamabad never materialized, but it nevertheless set a yardstick to follow for higher education in Pakistan.

Eqbal and I were close friends since 1958, wrote several articles/chapters together and organized for peace and justice throughout our lives. He became notorious after Nixon’s Justice Department indicted him and six other peace activists, including Phillip Berrigan, in the early 1970s for conspiring to kidnap National Security advisor Henry Kissenger, A Harrisburg jury threw out the case.

I used our voluminous correspondence over 40 years, our many conversations, his personal archive at Hampshire College where he taught for 15 years, and interviews with his family and close friends in Pakistan, India, North Africa, Europe, and North America to write the book. In doing so, I uncovered many aspects of his life that few people know. My aim was to show why, sixteen years after his death, his writing is still relevant and should be studied and discussed widely. He was, after all, a guru for our time.