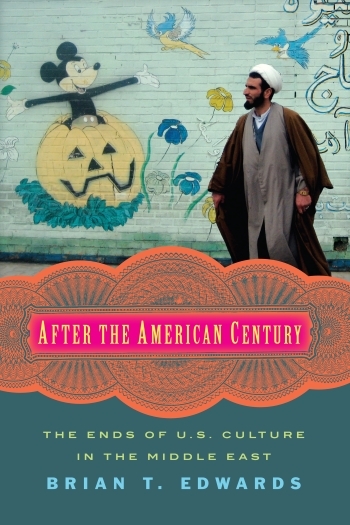 “Analysts of foreign affairs tend to relegate understanding culture as irrelevant to the hard work of political science and international relations…. I am increasingly convinced that this is an error—and a costly one. Cultural products and debates over them help to explain the world we live in.”—Brian T. Edwards

The following is a post by Brian T. Edwards, author of After the American Century: The Ends of U.S. Culture in the Middle East:

The devastating acts of murder and violence in France last month targeted a rock concert, a soccer match, and cafés in Paris’s dynamic 10th arrondissement. This past January, a satirical magazine most famous for its cartoons was attacked. The sites where these terrible crimes took place were not simply gathering places. They were locations where people go to consume or produce “culture.”

In the general hysteria of our times, we tend to reduce cultural products and their consumption to simple rather than complex things. Rushing to keep up with an ever more dire geopolitical landscape, an easy binarism prevails: us versus them, civilization versus barbarism. Paris becomes simply the romantic city of lights under attack, the debate over Charlie Hebdo a simple question of freedom of speech.

But this replaces a more nuanced sense of how culture is both contested and how cultural products can offer a window onto the complexities of life in various parts of the planet during a time of global transformation.

I am increasingly convinced that this is an error—and a costly one. Cultural products and debates over them help to explain the world we live in with a nuance that is missing from social science formulas or the distant perspective that media talking heads take.

When I read or listen to accounts of the great and ancient tensions between Sunni and Shia, or analysts who chart the national rivalries between states like a giant game of Risk, I feel that the discussion is too abstract and fails to reflect the realities as I have come to understand them based on more than two decades of discussions with people in the Middle East and North Africa.

Three or four years ago, I had a get-to-know-you meeting with the head of a prominent Middle East think tank. I told him about my work trying to understand the relationship between cultural products and politics. “Very nice,” he said, “my wife is interested in culture.” The gendered comment was meant to be dismissive: culture doesn’t matter to men’s work. The meeting didn’t last much longer.

The perils of not attending to the realm of culture are significant, especially because political scientists are notoriously bad at predicting actual outcomes and future developments.

In the summer of 2011, Foreign Affairs ran a story entitled: “Why Middle East Studies Missed the Arab Spring.” With its title splashed across the influential magazine’s cover, the implication was that academia had once again blown it, and had little to offer practitioners. But the author, a political scientist, so neatly circumscribed the field of Middle East studies as political science that readers might be excused for thinking that no other disciplines pertain to this interdisciplinary field.

In cultural anthropology and literary studies of contemporary Egypt in those same years, much richer discussions had been taking place where the sense of bubbling frustration and revolutionary recklessness among Egyptians were quite visible. But cultural studies, unlike the brand of political science referred to in the Foreign Affairs essay, doesn’t consider predicting the future to be its business.

The field of cultural diplomacy seems to be one area where geopolitics meets cultural studies. Yet, as I commented on this page yesterday, cultural diplomacy tends to reduce cultural products of their complexity when it tries to harness their alleged soft power for strategic ends.

So what can someone trained to do close readings of literary texts and other cultural products offer to discussions in such lofty fields as international relations?

There are two tactics here.

First, paying attention to contests over culture means focusing on the public discussions of cultural products as they are consumed: debates, protests, and disagreements. Many films and novels enter the world as social events. Big-budget Hollywood movies and low budget shorts circulated on the Internet can stir passions. In After the American Century, I discuss both the Iranian response of Ben Affleck’s film Argo, which to most Iranians was a slap in the face, and the global protests and outrage at the low budget YouTube video “Innocence of Muslims,” made in southern California by a former pornographer.

Films, novels, and comics from the Middle East and North Africa can frequently provoke vigorous debates in the region, such as Magdy El Shafee’s graphic novel Metro in Egypt (quickly censored by the Mubarak regime) or the Leila Marrachki’s controversial film Marock in Morocco.

The second tactic is careful attention to particular works. Close readings of cultural texts is the bread and butter of literary criticism. A graphic novel or a literary blog can be a point of reference and inspiration for huge numbers of readers. This was the case in Cairo in the years leading up to the 2011 uprisings when a new cohort of young Egyptian writers, comics artists, and bloggers helped both define and inspire a generation one called the “I’ve-got-nothing-to-lose-generation.”

We should have an expanded sense of what is worth reading too. In After the American Century, I take up several novels and films for careful analysis. But I’m just as interested in the works of the underground digital video pirate named “Hamada,” the Moroccan YouTube uploader known as the Sniper of Targuist, Iranian blogs, and Egyptian comics. I even start my book with a Beirut café owner and take his menu itself seriously.

It’s a particular challenge for a critic inspired both by global culture and dedicated to reading texts closely to try to analyze texts and phenomena that were (some of them) fleeting or unknown to American readers. Traditionally, literary studies focused on the major works, or works that critics implicitly argued should be read more widely.

But I can’t quite say the same about some of the works I take up in my book—like the multiple competing Iranian dubbings of Shrek. Still, it matters to understand, in this case, that for Iranians, so popular and rich was the terrain of dubbings of DreamWorks’ CGI film that Iranians could claim to me, with a straight face, that Shrek was really an Iranian film.

We are all consumers of culture, whatever we do in our day jobs. Understanding the cultural products that animate people in whatever context they are living in is the first step to understanding the world we live in with subtlety. And doing so just might allow us to move away from the binarisms and formulas that explain little except themselves.