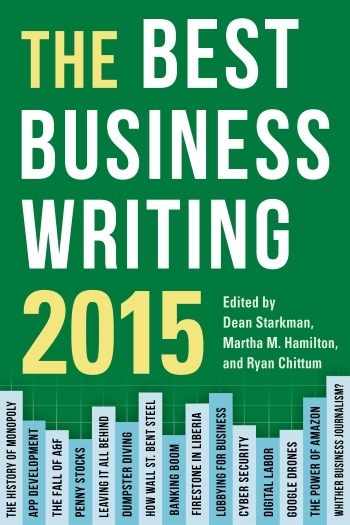 “This collection of brilliant journalism … is a testament to business journalism’s resilience in an age of extreme disruption in its own business — media — and to the fact that the business-news ocean is vast and full of unexpected discoveries.”—Dean Starkman

In his introduction to The Best Business Writing 2015, Dean Starkman looks at this year’s excellent crop of stories and analyzes the current state of business journalism:

This collection of brilliant journalism, the fourth in a series, is a testament to business journalism’s resilience in an age of extreme disruption in its own business — media — and to the fact that the business-news ocean is vast and full of unexpected discoveries. It is a particularly rich collection this year; readers will find an astonishing range of topics across an equally astonishing range of outlets. Marcus Stern and Sebas­tian Jones tell of how the combination of volatile crude oil mov­ing across aging railroad infrastructure has put towns across the continent in danger of disasters like one that happened in Lac-Mégantic, Quebec, not long ago. That piece represents the joint efforts of relatively new players on the business-investiga­tive scene, InsideClimate News and the Weather Channel. Alexis Madrigal in The Atlantic uses Google’s ambitious, and unnerving, drone-development problem to explore how the search giant really thinks and where it’s going. Jordan Weissmann off ers a delicious take on the surprising economics of Katz’s, the legendary New York deli, for Slate, which by now is a digital-news elder statesman.

It’s also true that one prominent and important new outlet, the International Consortium of Investigative Journalists, is not represented here—despite publishing some of the most remark­able business journalism of recent years, including 2014’s devastating exposé of the British Swiss banking giant, HSBC. Based on a trove of 60,000 leaked files with details on more than 100,000 HSBC clients, a team of journalists from more than 50 countries unearthed secret bank accounts maintained for criminals, traffickers, tax dodgers, and others, including prominent politicians and celebrities. The series, which evoked a clear mea culpa and promise of change from a humbled HSBC, doesn’t appear here only because two of the three editors of this volume were deeply involved in producing the series for ICIJ (hint: I wasn’t one of them). Their argument that the conflict of interest was too great to include in Best Business Writing 2015 won out over my strenuous objections, but at least readers should be aware of ICIJ’s presence as a new force in journalism.

But it is also true that so-called legacy news organizations are well represented in this volume. The estimable Gretchen Mor­genson of the New York Times argues trenchantly that the over­weening size of the financial sector not only puts taxpayers at risk of “too big to fail” bank collapses but also imposes insidious costs on the real economy by allocating capital not to its highest use but to bubble-prone sectors like real estate. The Wall Street Journal’s highly regarded veterans Mark Maremont and Leslie Scism de­liver a scintillating read on the fall of a young insurance magnate whose investments included a Caravaggio. Let’s not forget Frank­lin Foer’s trenchant explanation of why the Amazon monopoly is bad for the republic, published in the century-old New Republic (from which Foer has since resigned over disagreement about its direction). And Bloomberg, founded in the early 1980s, emerged as a global journalism force last year with several enormously interesting stories, led by Zach Mider’s exploration of how the richest among us pay so little in taxes. It is correctly headlined, “The Greatest Tax Story Ever Told,” and is certainly the only one that includes a tax loophole set to an operetta.

But let’s not kid ourselves. Earlier exultations about a flower­ing of journalism in the age of the Internet have given way to more sober assessments about the difficulties of supporting a full-fledged newsroom on the meager returns from digital sources. A Pew study last year ran the numbers and found that the thirty largest all-digital operations—Vice, Buzzfeed, Vox, Huffington Post, Business Insider, and other famous names— account for only 3,000 journalism jobs combined. That is a fifth of what has been lost in the newspaper industry, which still remains backbone of American newsgathering—even in its shrunken, desiccated infirmity. Newspaper advertising is now at the lowest levels on record, considering inflation. And newspapers continue to struggle with declining print revenues and no growth engine to off set the losses. Newspaper subscription revenue fell 3 percent last year, Pew says, throwing cold water on hopes that digital pay-walls and other reader-pay devices would provide a floor under revenue declines.

Disruption remains the order of the day. A much-heralded accountability-journalism enterprise founded in 2013 by the eBay billionaire Pierre Omidyar was forced to significantly scale back its ambitions two years later and then hit more bumps when its star writer, Matt Taibbi, walked and a much anticipated finan­cial magazine was scraped. Not long after Foer published his ex­posé, he was gone from TNR, along with a huge chunk of the staff in a mass resignation, after a Facebook billionaire took over and turned the place inside-out, not in a good way. Meanwhile, the former Columbia Journalism Review executive editor Michael Massing, in a lengthy meditation on the digital news landscape in the New York Review of Books, has found the output of the digital entrants, while laudable in some particulars, wholly in­adequate overall to inform a republic as sprawling and complex as ours.

And he is right. The main losses have been felt in city halls and state houses and at the once-great regional papers in Provi­dence, Baltimore, Des Moines, and Louisville, where coverage of local government has essentially evaporated. The loss to civil society and public knowledge is beyond calculation. Meanwhile, it’s a great time for grafters and crooks and special interests.

Business news has fared better, but there are worrisome signs everywhere. The Wall Street Journal announced layoffs, having previously dramatically reduced the amount of long-form jour­nalism it produced after its 2007 purchase by Rupert Murdoch. Forbes was sold to Chinese investors and long ago drift ed from its tradition of quirky and often biting long-form investigations. In the wake of the financial crisis, Fortune cut back its number of issues to eighteen from twenty-five, and that’s where it re­mains. No one thinks the New York Times is thriving, and the paper has already lost some of its top business-investigative re­porters. The Financial Times just was sold from its cozy spot in­side a British education giant, Pearson PLC, to a Japanese media company, where the future may hold culture clashes. Bloomberg, which mints money in its financial-data business, is in tur­moil as it struggles to figure out its media model.

And that’s because, so far, there isn’t one. And that signals danger.

Does anyone think that the world of business, markets, and economics isn’t taking up an increasingly large space in the pub­lic sphere? Does anyone really believe that Wall Street is less powerful now than before the crisis? That Silicon Valley—the Googles, Facebooks, and Amazons—has less of a direct role to play in each of our personal lives? That Washington is less be­holden to corporate lobbying? That the world of business is less complex and influential and in need of exploration and explana­tion than it was a few years ago? I don’t think so.

So, reader, when you pick up this book and scan the rich array of powerful business journalism (and do not miss Francesca Mara’s dissection of class issues in the personal assistant econ­omy), I sincerely hope you enjoy it.

Just don’t take it for granted.