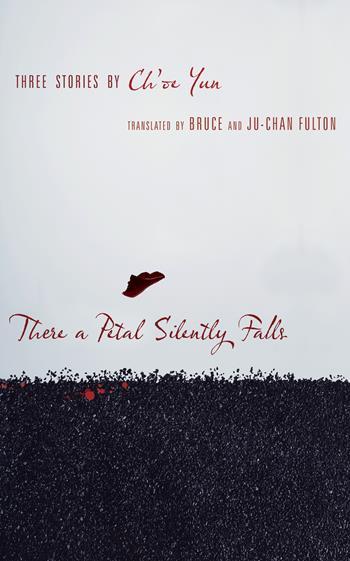 Welcome to the Columbia University Press Thursday Fiction Corner! This week Russian Library editor Christine Dunbar asks how much, if any, contextualizing information should be provided to the reader of a translation?

I was once astounded by the return of a bizarre detail late in a Krzhizhanovsky work—so astounded, in fact, that I flipped back to see in what context it had originally appeared—and found that I had read it not early in the text but rather in the preceding scholarly introduction. But introductions can serve an important function, particularly for translations, where a reader often lacks background knowledge assumed in the original audience. Bruce and Ju-Chan Fulton’s translation of Ch’oe Yun’s There a Petal Silently Falls eschews an introduction for a brief translators’ afterword, and this fact—combined with my own ignorance—led me to read the title novella without any knowledge of the Kwangju Massacre of 1980.

This has, in my view, two main consequences. First, it allowed me to read the work as primarily about rape. The narration combines chapters in the voices of 1) a construction worker who rapes and beats a mute teenager, 2) the traumatized teenager herself, and 3) a mysterious group attempting to locate her, and this structure serves to underline the teenager’s inability to speak aloud in the world of the story. Her misadventure is sparked by the deaths of her brother and mother, leaving her wandering the countryside alone, looking for her brother’s grave.

The second consequence is that I saw the group searching for the teenager as suspect and rather sinister. In a world where the male response to coming across a mute, homeless, under-aged girl is, time and time again, rape, I assumed these male searchers must have nefarious designs on her as well. As student protesters who try to process the death of a comrade by searching for his orphaned sister, the group is much more sympathetic.

A contextualizing introduction would have told me this from the start. However, by providing a lens through which to understand the events in the novella, it would also have foregrounded this lens. The very helpful afterword tells me that the piece was originally published in 1988 in a literary journal and was Ch’oe Yun’s first published literary work. In the first chapter, the narrator declines to specify a broad temporal setting: “A certain year, a certain month, a certain day. Exactly three in the afternoon” (4). Certainly all is not well with the teenager before the construction worker rapes her, and the reader learns fairly quickly that her mother’s violent death is at least part of the cause of her traumatized state. In each of the girl’s narrative sections, we learn more about what happened that day, and I don’t know when a reader of that original 1988 journal would have made the connection to Kangju. Certainly the reader would have done so when—more than halfway through the novella—the narrator makes explicit reference to it: “Rumors began to swirl and surge in the cities, coursing swiftly from one lone mouth to the next like a taboo, rumors of a massacre in a city to the south, the details too horrible to be believed” (55).

There a Petal Silently Falls is a haunting story, told with the remarkably successful use of different narrative voices. It is undoubtedly “about” many things, including but not limited to the Kwangju Massacre and rape. But I was glad that I read it without knowing beforehand what kind of trauma to expect. Of course, the moral of this story may not be to replace introductions with afterwords; I could just as easily learn to save the introduction for last.