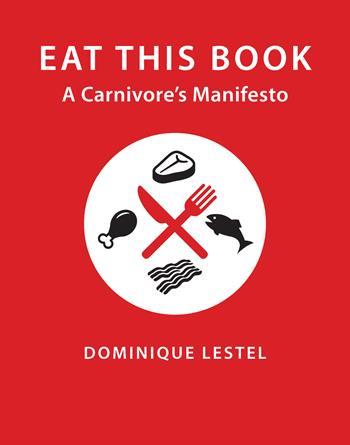 The following is an excerpt from Eat This Book: A Carnivore’s Manifesto by Dominique Lestel and translated by Gary Steiner.

Generally speaking, the vegetarian, like the humanist, adopts an attitude of unacceptable arrogance when she makes a moral judgment about how life ought to be and how other beings ought to behave, for in doing so she places herself above other beings

This vegetarian is an omnivorous animal who considers the dietary regimen of her species to be immoral. Such a “demonization” of the natural is not without precedent. We have seen movements campaign against sexuality (even though it is a normal form of behavior) and in favor of the subservience of women to men (even though, from a biopsychological point of view, women are perfectly autonomous and stand in need of no symbiosis with a human being). One may think that it is preferable not to eat meat, and that is perfectly acceptable; but it is only with difficulty that one can turn this position into a major ethical choice. The regime of meat eating is part of what it means to be human today, whether one likes it or not: we have an enzyme for digesting elastin, a fiber of animal origin, and we need vitamin B, a molecule produced exclusively by animals.

Donna Haraway makes the same point when she notes that in denying a specific feature of the living the vegetarian’s position is fundamentally a fatal ideology. As she argues, there is not nor has there ever been a living being that lives without exploiting at least one other living being. In this respect, the vegetarian purports to want to protect living beings at all costs but is in fact opposed to them.

As the American poet Gary Snyder says facetiously, “Everything that breathes is hungry”! Eating—that is, eating other living beings—is part of animal life, and the desire to change life reflects unacceptable vanity. Buddhism, whose adherents include Gary Snyder, is aware of the impossibility of eradicating all suffering, and it has never issued the demand that suffering be eliminated; it satisfies itself with the endeavor to reduce suffering within the limits of what is possible and reasonable for us to do, and it is especially concerned with eliminating needless suffering.

For the feminist Sharon Welch, we are not capable of changing in a unilateral way. The ethics of control, which seeks to reach its objective without taking others into account, needs to be replaced by an ethic of risk, which accepts the fact that our ability to change ourselves and the world is limited but also requires us to take full responsibility for our actions.

Vegetarians systematically overlook the fact that eating meat has a fundamental significance and that it teaches us a lesson about humility in that it reminds us of the interdependence of all living beings.