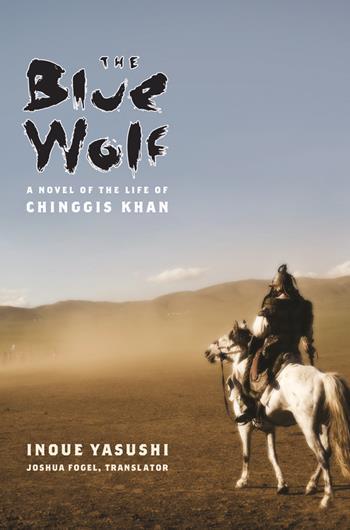 I am wary of treating literary texts as windows into the soul of a people. Presupposing the existence of the individual stable concepts of “soul” and “people” is bad enough; putting them together inevitably smacks either of nationalism or racism. I think of Dostoevsky’s 1880 Pushkin speech, where he calls Tatiana “the apotheosis of the Russian woman.” I find Belinsky’s equally political remark about Eugene Onegin—that it is “an encyclopedia of Russian life”—to be more congenial, if also limiting. (This is, after all, the same guy who told Gogol that his books could be aesthetically bad as long as they weren’t bad for society; not really an art for art’s sake type.) This is a very roundabout way of saying that I am so pleased that we published Joshua Fogel’s translation of Inoue Yasushi’s The Blue Wolf: A Novel of the Life of Chinggis Khan.

It could easily never have been translated. Originally serialized (I learned from the brief but informative Translator’s Note) in 1959-60, and immensely popular in Japan, it took almost 50 years for the book to appear in English. And I can imagine why. There’s something rather odd about the idea of translating a Japanese novel about Mongolia into English. But why is that?

I think some of it has to do with our tacit expectations of a translation. With some exceptions for genre fiction—Swedish crime novels, say—we expect a translation to be excellent literature; after all, a translated book has been elevated above its peers, one of the chosen few to appear on a world stage. But at the same time, we expect it to fulfill an anthropological function. We want to learn something about its country of origin. Our (well, my, at least) ignorance is so vast that the simplest of details becomes a revelation. We don’t read Wordsworth and think, “oh, so daffodils grow in the Lake Country, how interesting,” but we may well have such a thought about the flora of the steppe.

The Blue Wolf is remarkably effective in this way. There isn’t, granted, much discussion of flora, but in reading the novel I learned a great deal about social mores, battle tactics, and political maneuvering on the Mongolian plateau. As for any historical novel, these details are the result of painstaking research, not the chance-met details a reader might glean from reading something of foreign origin. According again to that very useful Translator’s Note, Yasushi was well regarded in the academic community for taking the time to get these details right. All that is missing is the reader’s feeling of delight (if we’re being charitable) or self-righteousness (if we’re not) in the immersive, two-for-one nature of reading something set in the same foreign locale that produced the author. That is, the feeling that you are increasing your knowledge not only of Japanese literature but also of Japan.

Perhaps a Japanist would feel comfortable drawing some kind of conclusion from the fact that this book was so popular. I do not. But I found it to be an enjoyable and fascinating look at the life of Chinggis Khan, and the book’s language of origin, in regard to that basic fact, is neither here nor there.