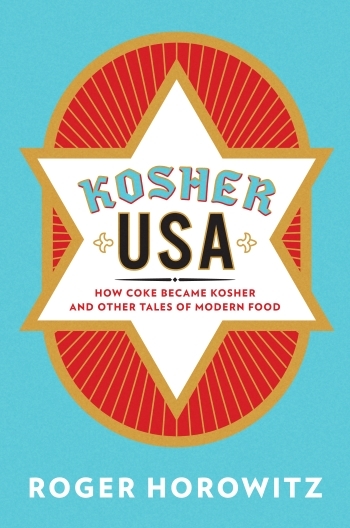 The following post from Roger Horowitz, author of Kosher USA: How Coke Became Kosher and Other Tales of Modern Food, was originally published on his blog. The post reveals the ways in which Kosher meat production was brought into the processes of the modern U.S. food industry.

I came across an amazing man while looking for information on kosher meat. A Harry Kassel came up in a New York Times search, appearing in a 1973 article about meat shortages and described as the largest wholesaler of kosher meat in the New York area. Other searches turned up nothing more; so I turned to one of the historian’s great resources—the telephone book—and found him living on Long Island just past the end of the Belt Parkway. Spry and sharp at 89, he told me about his remarkable life, and in so doing gave me the backbone of chapter seven in Kosher USA, which I called “Harry Kassel’s Meat.”

He was born in Racine, Wisconsin to a Jewish family that tried to keep kosher. He joined the military during World War II, and rather than trying to build up his military service, joked with me in his self-deprecating manner that since the US wanted to win the war, they kept him in the country. Recently demobilized in 1946, he agreed to a blind date with Zeena Levine, who was then a freshman at the University of Wisconsin. The two hit if off (even though she called him a “cheapskate” in our interview since he took her to a bar instead of a restaurant) and were soon married. Harry joked that since she wouldn’t go to work, he had to, and took the easy way out by joining his new father in law’s business.

Zeena’s father was a butcher—on a big scale. With his partner Sam Cohen, Joe Levine owned several large kosher butcher shops in Brooklyn and a small chain of non-kosher shops. Kosher meat was a thriving business after World War II, and Levine took in his son-in-law and taught him how to evaluate recently-slaughtered meat and decide which carcasses to buy for his butcher shops.

After a few years Kassel went into business for himself and established a meat wholesale company in the Brooklyn plant once operated by Swift & Co. His training made him acutely aware of the peculiar nature of kosher beef – that the same animal yielded kosher and non-kosher cuts. The Ashkenazi tradition was to only consume the forequarters, so even though these cattle yielded kosher briskets and rib roasts, the desirable loin cuts could not enter the kosher trade. Kassel made a name for himself by buying the hindquarters of prime, kosher-killed cattle and distributing the tenderloins and porterhouse steaks so prized in New York’s white tablecloth restaurants.

He quickly realized the benefits of buying the entire carcass, and sending the forequarters into kosher distribution channels while the hindquarters went to the high-end restaurant market. By the mid-1960s Kassel’s company was selling all over the United States, and was the nation’s largest kosher beef wholesaler. He was one of the first to work with the new Cryovac technology that allowed plastic packaging to be shrink-wrapped over meat before shipment, vastly extending the time it could spend in transit. Able to send cuts from the non-kosher hindquarters to institutional buyers throughout the United States, Kassel was well-positioned to manage distribution of meat from the forequarters to kosher outlets.

A Reform Jew and an active benefactor of Jewish causes, Kassel was able to manage the tricky shifts in kosher meat supply and demand in the 1960s and 1970s. The large slaughterhouses in the New York area that had supplied kosher meat to the region for decades had largely closed by the 1950s, pushing kosher meat production to the Midwest and into small regional plants. It took a wholesaler with feet in both the kosher and non-kosher meat trades to sustain a steady supply to both markets. He was especially adept at provisioning Hasidic and Orthodox customers who wanted glatt beef, a demanding standard that gentile slaughterhouse owners had a hard time understanding. Committed to respecting the preferences of his co-religionists—even if their notion of Judaism was different than his—Kassel worked diligently to make sure that the meat he supplied fully met the requirements of the supervising rabbis.

Harry Kassel left the meat business in 1980, convinced that meat consumption was going to fall (it did) and worried about the pressures of the new large meat concerns on his operation. His concerns were well-placed. Turmoil swept through the meat industry in the 1980s, with old firms going bankrupt and new dominant companies forming out of this chaos. He put his skills to use for Israel, helping to create Yarden, an export-oriented cooperative that brought Israeli food products to an international market, and serving for many years as vice-president of his synagogue. And every fall, Harry and his wife Zeena travel to France to see the places they love to visit. It was a great mitzvah to have the chance to get to know this remarkable man.