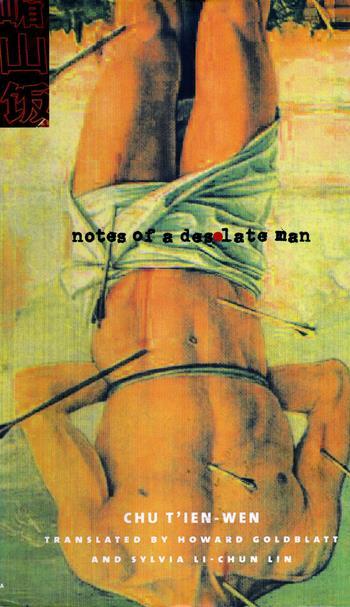 Welcome to the Columbia University Press Thursday Fiction Corner! This week Russian Library editor Christine Dunbar tries to explain why Chu T’ien-wen’s Notes of a Desolate Man is so awesome.

I have been struggling to write about Chu T’ien-Wen’s Notes of a Desolate Man, which I read in Howard Goldblatt and Sylvia Li-Chun Lin’s translation, because by starting with one aspect of the text, I am unavoidably not starting with any number of other aspects, all equally deserving of attention. In other words, I am finding hard to write about this book because I love it so much.

It is a book about belonging and mortality and art, which is just about the least informative thing I could say. It is also a book about a Taiwanese gay man, Xiao Shao, watching his best friend die of AIDS. The beginning of the novel foregrounds this information, as though the implied author is conspiring with the first-person narrator to show the reader that being out and proud kills you. But the narrator’s language of guilt, sin, and unnaturalness only partially obscures a life rich in love, art, and, above all, words.

Shao’s alienation from what he sees as normal family life is reinforced by the book’s non-linear chronology—and how could it not be, with a narrator whose default touchstones are arthouse cinema and French theory. But in the novel’s penultimate chapter, Shao recognizes that the China he both longs for and shuns, which he has been conflating with the space on the map occupied by the mainland, doesn’t actually exist, or if it does exist, exists only in language, only as a concept that he himself creates. I would argue that on a higher authorial level, a symmetry is being drawn between the false outsider status of the homosexual and the Taiwanese people. That is, perhaps in time Shao will recognize that his idealized notion of a heterosexual nuclear family that flawlessly insulates its members from loneliness and loss cannot be found in reality, and to the extent that a family can mitigate sorrow, his own is no less capable.

As a Slavist, I can’t help but compare Notes of a Desolate Man to Notes from the Underground, and there are many similarities: the intimate tone; the defiant embrace of irrationality; the loneliness; the non-linearity; the centrality of thoughts about sex and power. Even the way Shao weaves together personal reflections with critiques of social theory mirrors the narration of the underground man. And the narrators, both of whom are 40, are going through something of a midlife crisis. But Dostoevsky’s narrator is an outward-facing one, ranting to an audience, seeing himself as set against all of society. Shao’s narration is quieter. He’s unreliable, but not slyly so. This is a man attempting, if not quite managing, to be honest with himself, to gain meaning through details and grand theory alike. The underground man would scoff at Shao’s naiveté, but I appreciate his attempt to use the tools at his disposal—Lévi-Strauss, Fellini, Miyazaki—to make sense of a life not governed by reproductive cycles, and that will eventually end in death.