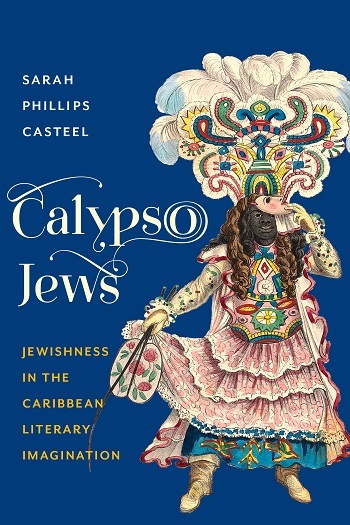 “Like the Caribbean literature I examine, the Passover seder encourages us to make connections between different histories of oppression.”—Sarah Phillips Casteel

The following post is by Sarah Phillips Casteel, author of Calypso Jews: Jewishness in the Caribbean Literary Imagination.

The annual Jewish ritual of the Passover seder transports its participants back to the time of Egyptian slavery. During the seder, ancient history is reanimated through storytelling and eating symbolic foods. The Haggadah (or “telling”) instructs Jews that it is incumbent upon them to narrate their suffering in Egypt and liberation from bondage: “In every generation each individual is bound to regard himself as if he had gone personally forth from Egypt, as it is said, ‘And thou shalt relate to thy son on that day saying, this is on account of what the Eternal did for me, when I went forth from Egypt.'” At Passover, Jews transmit this story from one generation to the next through a process in which, in the words of Rabbi Lawrence Kushner, “we not only remember that we were slaves but also re-experience ourselves as slaves.”

As a scholar of Caribbean literature, I am interested in how contemporary writers also use narrative to engage and reactivate the past. Just as the Passover seder compels its participants to actively recall the Israelites’ journey from slavery to freedom in order to shape the consciousness of the next generation, contemporary Caribbean writers transport us back into the slavery past in order to help us make sense of the present. Part of the power of this act of literary imagination is that it brings forgotten histories to light. As I explore in my new book, one of the lost histories recovered by Caribbean writers is that of the resettlement of Jewish refugees in the Caribbean from the seventeenth century onward.

Several years ago, while wandering through the Jewish cemetery in Bridgetown, Barbados, I was excited to come across a tombstone bearing the name Benjamin C. d’Azevedo. I immediately recognized this name, which is shared by the Jewish protagonist of I, Tituba, Black Witch of Salem, by the Guadeloupean author Maryse Condé. In Condé’s 1986 novel, which is set in Barbados and New England during the Salem Witch Trials, the Jewish merchant Benjamin Cohen d’Azevedo purchases the slavewoman Tituba and eventually frees her, securing her passage back to the Caribbean. Had Condé visited the Bridgetown cemetery and found her Jewish protagonist here, I wondered? Why was she so drawn to the Sephardic Caribbean story?

To the surprise of some readers, slavery novels by Caribbean writers such as Condé, David Dabydeen and Cynthia McLeod feature Jewish characters. These protagonists reflect the historical presence of Jews in Caribbean colonies such as Barbados, Jamaica and Curaçao. Caribbean authors introduce sympathetic Jewish characters in order to tell a larger story about the diverse forms of racial and religious persecution that shaped the colonial Americas. Their works remind us of the historical and cultural significance of Jewish communities in the Caribbean—communities that produced, for example, Isaac Mendes Belisario (Jamaica’s “first national painter”) and the French Impressionist Camille Pissarro, whose upbringing in St Thomas inspired both Derek Walcott’s long poem Tiepolo’s Hound (2000) and Alice Hoffman’s novel The Marriage of Opposites (2015).

Until recently, encounters between Blacks and Jews in the Caribbean have been largely overlooked by academic scholarship. By contrast, writers are much freer to cross over the kinds of boundaries that have kept the academic fields of Jewish studies and postcolonial studies so firmly separated. Caribbean writers address not only the Sephardic Jews who resettled in the Caribbean in the aftermath of the 1492 expulsion from Spain but also later arrivals such as the “Calypso Jews,” Ashkenazi refugees from the Nazis who found safe haven in Trinidad in the late 1930s.

Like the Caribbean literature I examine, the Passover seder encourages us to make connections between different histories of oppression. At the start of the seder, an invitation is issued to the stranger to join the meal. The leader of the seder holds up the matzah and says: “This is the bread of affliction which our ancestors ate in the land of Egypt; let all those who are hungry, enter and eat thereof; and all who are in distress, come and celebrate the Passover.” For many Jews today, Passover, with its central belief that humanity will overcome tyranny and oppression, offers an occasion to reflect on the broader social relevance of the holiday and to draw attention to the plight of other dispossessed populations.

The Haggadah‘s narrative of the journey from slavery to freedom is often understood as resonating with African American experience in particular. The Whipping Man, by American playwright Matthew Lopez, explores the cross-cultural resonances of the Exodus narrative while also complicating the idea of Jewish victimhood. Set in 1865 on a Jewish-owned plantation, Lopez’s Civil War drama uses the Passover seder as a dramatic device. In the play’s second act, two newly liberated slaves and their former master assemble to hold an impromptu seder. The text of the Haggadah, which is recited by one of the former slaves from memory, takes on a new immediacy in the aftermath of the Civil War. Scrounging for materials to complete the seder plate, Lopez’s characters substitute an actual brick for the charoset that traditionally stands in for the bricks and mortar used by the enslaved Israelites. (A recent Tablet article recommending a charoset recipe featuring ingredients from crops of the transatlantic slave trade makes a similar point about the immediacy of the seder for African American Jews.)

I began this blog by reflecting on how the ritual of the seder prompts Jews to reimagine themselves as slaves. Contemporary literature about slavery encourages a complementary form of remembrance, one that challenges the idea that the categories of slave and master are always sharply opposed. Edward P. Jones’s 2003 novel The Known World, for example, undercuts the master/slave opposition by including an African American character who own slaves. Similarly, Lopez’s The Whipping Man capitalizes on the shock value of a little known history of Jewish slave-holding and plantation ownership that, while relatively minor, is nonetheless difficult for North American Jews to confront. Lopez’s Jewish planter is part of a larger Jewish Atlantic world that also included the Caribbean. In Caribbean literature, however, we find a much more matter-of-fact acceptance of the historical fact that Jews were part of the plantation societies of the Americas and that they were, in historian Jonathan Israel’s words, both “victims and agents of empire.” Caribbean writers tend in their fiction and poetry to align displaced members of the Jewish and African diasporas as fellow strangers. At the same time, in recalling historical encounters between these two dispossessed populations, they also remind us that strangers can sometimes become masters.