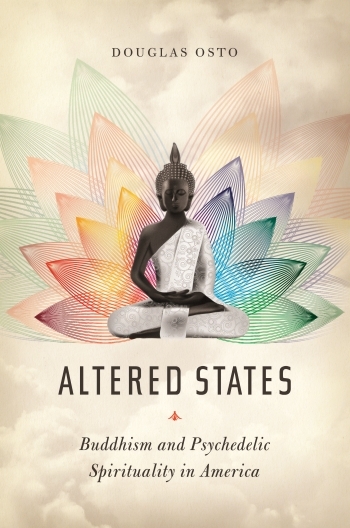 “These altered states by their very nature exceed the bounds of reason and challenge existing paradigms. We as human beings tend to fear the novel, strange, weird, and extraordinary. Thus it is not surprising that the status quo often is highly suspect of new religious movements, or “cults,” and generally attempts to suppress them, often with extreme prejudice. However, fear is not our only instinct, and hopefully not our strongest.” — Douglas Osto

This week, our featured book is Altered States: Buddhism and Psychedelic Spirituality in America, by Douglas Osto. In today’s post, excerpted from the book’s preface, Osto explains that he hopes to tell “the story of how Buddhism and psychedelic spirituality coemerged, mutually influenced each other, and forever changed the religious landscape of America.”

Don’t forget to enter our book giveaway for a chance to win a free copy of Altered States!

“Man’s greatest dread is the expansion of consciousness.”
—Henry Miller, Time of the Assassins: A Study of Rimbaud

This book does not promote breaking the law of any land; nor does it demonize, denigrate, or dismiss anyone’s religious/spiritual beliefs or practices. As an American born and bred, I have a strong conviction in the individual’s right to freedom of religion. As far as my political views concerning the use of psychoactive substances, I describe myself as libertarian. I believe every adult individual’s body is her own sovereign domain; thus every rational person has a right to do whatever she wants to her body without the interference of a paternalistic government legislating what is in her best interests. Also, in regard to morality, my Catholic upbringing has convinced me of the supremacy of one’s individual conscience. And legality and morality are clearly different things. For example, many today (myself included) would regard the persecution of someone for his sexual orientation or possession of another human being as someone’s property to be immoral acts. However, in the United Kingdom, for example, homosexuality was punishable as a crime until 1967, and slavery was legal in parts of the Empire until 1843.

It should be clear from the above comments that I am not against the use of psychoactive substances for religious/spiritual purposes, regardless of whether such use is deemed “illegal” by some governments. Since I believe an individual’s freedom to religion, absolute sovereignty of her own body, and individual conscience each trump any current laws of the land, I find arguments against the religious use of psychoactives based on the legal status of these substances unconvincing. Moreover, claims that someone should not practice his religion because it could be “dangerous” to his health are equally unconvincing. First, the real health risks of the classic psychedelics appear minimal when compared to the risks of using legal drugs such as alcohol and tobacco. Second, legislating against a person’s or group’s religion out of concern for their health is paternalistic in the extreme. Early Christianity was both illegal and hazardous to your health if you lived in the Roman Empire. And yet, as Tertullian wrote, “The blood of martyrs is the seed of the Church.” In other words, without the outlawed and dangerous activities of the early Christians, Christianity would not be a world religion today.

World religions such as Christianity, Islam, and Buddhism, as well as new religious movements, commonly begin with charismatic leaders, who undergo nonordinary experiences through altered states of consciousness and induce those states in others. These altered states by their very nature exceed the bounds of reason and challenge existing paradigms. We as human beings tend to fear the novel, strange, weird, and extraordinary. Thus it is not surprising that the status quo often is highly suspect of new religious movements, or “cults,” and generally attempts to suppress them, often with extreme prejudice. However, fear is not our only instinct, and hopefully not our strongest. We are also naturally curious animals and seem to have an innate drive to transcend our human condition. Religion, I would maintain, has always played the handmaid to this transcendence.

In the mid-twentieth century within the United States of America a new chemical mysticism emerged, catalyzed by powerful psychoactive substances such as LSD-25, psilocybin, and mescaline. At the same time, Buddhism, a new religion imported from “the East,” was gaining converts and transforming in the process into new, modern Western forms. These two new religions, one homegrown and one imported, took root, bringing along their own leaders and means to achieve new altered states of consciousness. This book is the story of how Buddhism and psychedelic spirituality coemerged, mutually influenced each other, and forever changed the religious landscape of America.

We Americans have always prided ourselves on our freedom, and religious freedom is a cornerstone upon which this great nation was founded. It behooves all Americans to overcome our fears and prejudices of other people’s religions so that the integrity of the principle of religious freedom is maintained. To outlaw anyone’s religion, which is not a proven threat to the well-being and common good of the nation, is to threaten the freedom of any of us to practice our religion. And if you believe, as Thomas Jefferson did, “that religion is a matter which lies solely between Man & his God, that he owes account to none other for his faith or his worship,” then we must protect this freedom at all costs, even if it means protecting the rights of someone to practice a religion we do not necessarily like or agree with, or perhaps even fear.