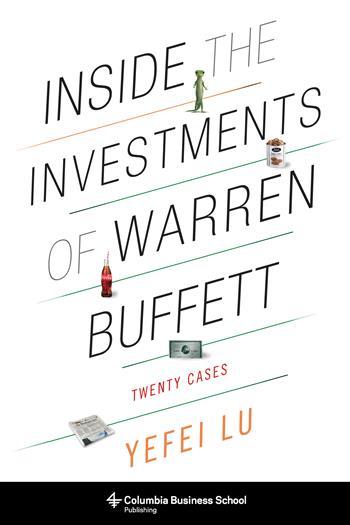 “Buffett’s legendary investing performance has prompted small investors to want to invest just like him and many investment professionals seek to emulate his strategies. But what are Buffett’s greatest investments and in which context did he make them? Moreover, what can we learn from his experience?” — Yefei Lu

Enter our book giveaway for a chance to win a free copy of Inside the Investments of Warren Buffett!

Over the last thirty years, Warren Buffett and his investment vehicle Berkshire Hathaway have become household names. Likewise, Omaha, Nebraska is no longer an unknown midwestern town for anyone in the investment community. Buffett’s legendary investing performance has prompted small investors to want to invest just like him and many investment professionals seek to emulate his strategies. But what are Buffett’s greatest investments and in which context did he make them? Moreover, what can we learn from his experience?

The focus of this book is to uncover answers to these questions by journeying through Buffett’s investing career. Specifically, I look at the twenty investments Buffett made that I feel had the largest material impact on his trajectory. I selected a cross-section of different types of investments and investments I found especially informative. I also considered the relative size of each investment at the time it was made.

My approach in analyzing these key investments was to look at the detailed actions Buffett took when he made his investment decisions and try to understand from a third-party perspective what rationales he or any investor was likely to have seen in each situation. Where appropriate, I tried to take the perspective of an investment analyst studying the businesses at the same time in which Buffett did in order to highlight Buffett’s unique standpoint. In this way, unlike the many biographical books written about Buffett, this book focuses on telling the story of Buffett only as it relates to his key investments. This book aims to extend beyond the various publications that contain significant information about Buffett’s investments (including Buffett’s own annual letters) by leveraging original source documents and other historical information where possible. My overall aim is to give readers a realistic analysis of the key investments that Buffett made and then have them draw their own insights and conclusions.

The book consists of three sections, ordered chronologically. The first section details five key investments that Buffett made between 1957 and 1968 when he ran Buffett Partnership Limited, the private investment partnership he managed before taking over Berkshire Hathaway. The second section details nine investments Buffett made between 1968 and 1990, the first two decades when Berkshire Hathaway served as his investment vehicle. The third and final section focuses on the period at Berkshire since 1990. A brief introduction to each section provides a picture of how each investment fits within Buffett’s career as well as setting the broader investment context during that time period of the U.S. stock market, the primary market in which Buffett invested. Individual chapters in each section focus on the specific investments, treating each as a case study. The final section of the book reflects upon the broader evolution of Buffett as an investor. It also summarizes my overall learning from Buffett’s investment philosophy and strategy based on my analysis of his twenty key investments.

Before I consider the Buffett’s specific investments, I want to define the methodology I used in my analysis. In evaluating an investment, my approach was, first, to understand the qualitative factors and context of the investment and then its valuation. For the valuation, I accessed the intrinsic value based primarily on earnings that I considered the sustainable level of earnings for the company. Often this included adjustments made based on the cyclicality of a business. At times I adjusted for depreciation and amortization costs compared to maintenance capital expenditures (CAPEX), and at other times I simply used the last year’s earnings. For the sake of consistency and simplicity, I chose to stick with EV/EBIT based on the normalized figures mentioned above as the earnings-based valuation metric, referring to P/E less frequently. In a few instances, where I felt it was warranted, I used an asset-based valuation instead of, or in addition to, the earnings-based valuation. The qualitative assessment and the valuation methodologies I have chosen are not the only ways to assess these companies. My analysis has a significant degree of interpretation, and certainly there are times when these interpretations could be improved by other adjustments that I did not make. In sum, however, this book aims to provide an accurate investment analysis of the companies based on the available data. Collectively, my analysis reflects my own best understanding and interpretation of Buffett’s investment decisions.