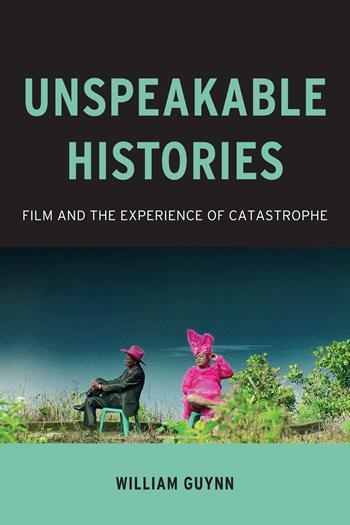 “Recovery of experience can be harrowing and is particularly so in films that speak about traumatic events in the catastrophic twentieth century. All the films evoke unresolved historical situations—unresolved for the communities that experienced them and for the historians who attempt to understand them—situations that continue to inflict individual and collective pain.”—William Guynn

The following is an interview with William Guynn, author of Unspeakable Histories: Film and the Experience of Catastrophe

Question: How does film portray history in ways that are unavailable to more conventional historical accounts

William Guynn: Unspeakable Histories is my second book on historical film. In the first, Writing History in Film, I wanted to show that film is capable of representing historical events, authentically and in its own terms. A good many historians are loath to take seriously any historical representation in film. Historical films, they contend, always lapse into the mode of fiction, and historians have plenty of evidence in the historical film genre to support their allegations. To make my argument, I selected a body of historical films to analyze which did not adhere to fictional models and did not fall back on the easy tactic of a dominant voice-over narration. What I found was that, unlike written history, these films used symbolic strategies and artful editing to transform the concrete images and sounds of film into the basic characters of historical narration: social groups, not individuals, involved in collective actions that occur in a space and time that is more cognitive than material.

I was very much aware that film does not lend itself easily to historical representation. Images are not words and have none of the discursive power of language. Indeed, the innovative forms developed by the filmmakers I studied subverted, so to speak, the relatively effortless narration of the fiction film. I began to ask myself: Is there another way that film can relate to the historical past? Is the medium, with its tangible connection to the world it “captures,” capable of depicting the past in modes that are even more authentic than what historical interpretation can give us?

Q: What was the role of Frank Ankersmit’s work in shaping your view of film’s possibility to represent history

WG: In Sublime Historical Experience, Ankersmit makes a radical gesture: he sections off the two putative components of historical discourse that historians had always considered inseparable. On one side he places historical interpretation—historiography proper—in which the historian, from his “objective” perspective, produces finished narratives extracted from bodies of facts. On the other side he exposes what supposedly lies “underneath”: raw experience, that immense domain infused with emotion and mood, historical sensation, to use Johan Huizinga’s concept. Liberated from the constraints of interpretation, Ankersmit suggests that experience can speak its own “language.” Indeed, that is what I found in the films discussed in Unspeakable Histories—where the return of the past occurs in fragmentary images and sounds, embedded in concrete places and subjected to the unfolding of time. Historical experience speaks in intuitive flashes, disturbingly primal and atavistic.

Q: Why did you choose to focus on films that speak about the catastrophic events of the twentieth century?

WG: Because those events are still alive! Despite the passage of time, the gradual disappearance of witnesses, and all that historians have written, the Holocaust, Stalinist atrocities in the West and the East, the brutal Pinochet coup d’état, the Cambodian and Indonesian genocides are still massively unresolved. Not only for those who experienced them directly but for the generations that inherit them. Historically speaking, trauma is a social possession. Footage of the Warsaw Ghetto shot by Nazi propagandists, for example, reawakens terror and desire in the hearts of survivors, who are driven to recover their experience through the concrete traces the images provide. And trauma can be contagious. Subsequent generations of Jews often share the victims’ sense of dread when confronted with the traces of a still living history. Moreover, these same images may burn in the consciousness of the spectator who is exposed to something like an unmediated experience of the past. Historiography orders and classifies events, but it cannot neutralize those events that continue to smolder in collective consciousness.

As W.G. Sebald eloquently suggests, the past is not over and done with; it lies in wait for us. It is enough to enter a courtyard in Paris neglected by time to be struck by objects from the past that protrude into our present—this Sebald gives as an example of a triggering experience. The films I study are full of objects that trigger such uncanny moments: a desacralized monastic church alive with the spiritual yearnings of Polish officers held prisoner there; solitary women combing the Atacama desert for the bones of their massacred loved ones; the desolate walls and the neon lights of a Khmer Rouge prison; the rooftop terrace where Indonesian gangsters murdered countless victims by garrottage.

Q: In your book you give an important place to films that have mythic content. Isn’t myth the polar opposite of history, the very thing historians exclude from consideration?

WG: In his Mythistory Joseph Mali contends that contemporary historiography has the obligation to study mythic compulsions because they are ultimately the motivators of most historical action. He is talking not only about “backward” communities stuck in the premodern era but also about the “developed” West. Western societies are just as much in need of mythic rituals. Without them their citizens would not know how to feel about the chaos of historical events that plague the world. Simon Schama asserts that rational Western culture, “with its gracious designs of nature” is still vulnerable to dark mythic forces like “irrationality, death, sacrifice, and fertility.”

I contend that the same can be said for the (less gracious) designs of Stalin’s monumental projects. Stalin set out not only to remodel Man but also to sovietize the landscape, using all the instruments of despotic power. In two films I study, Andrei Konchalovsky’s Siberiade and Larisa Shepitko’s The Ascent, myth responds to such political and ideological pressure by evoking a world of mythic experience. In the first, the whole of Soviet history is seen from the perspective of an isolated Siberian village where shamanism and animistic nature still hold sway. In the second, the partisan hero of the Second World War isn’t inspired by Marxist-Leninist texts but undergoes a spiritual awakening that takes on all the iconographic elements of an imitation of Christ. Both films for me are examples of what Mali calls “dramatic reactivations” of a society’s original impulses.

Q: Two of the films you discuss are about perpetrators of mass murder: Rithy Panh’s S-21: the Khmer Rouge Killing Machine and Joshua Oppenheimer’s The Act of Killing. Why this emphasis on the psychology of the murderer?

WG: When you are evoking the history of mass killings, it is important to make the executioners speak. They often survive in greater numbers than the victims and are therefore key witnesses to the experience of genocide. It is also important to make the killer face his crime, which is not at all easy to do. Mass murderers in Cambodia, at the time of the filming of S-21, had not been brought to justice, and those in Indonesia continued to operate with impunity because the government cynically honored them as anti-Communist heroes.

But murder will out and guilt, however well repressed, is palpable in certain murderers. They have an urgent need to speak about their crimes but they are recalcitrant, torn as they are between the desire to speak in order to rid themselves of the guilty symptoms that plague them and the terror they feel at the prospect of reliving moments that their whole being labors to suppress.

Rithy Panh and Joshua Oppenheimer developed techniques for thwarting this resistance to confession, two variants of what I call psychodramatic mise en scène. In S-21 Panh, the implacable director, invites several willing but nervous executioners to return to the Khmer Rouge prison where they labored and asks them to replay their daily experience of torture and murder. Under the pressure Panh exerts, the fictional role can slip into the active recovery of the experience of genocidal acts. In The Act of Killing, Oppenheimer uses a cinematographic method: he proposes to a group of gangsters, who operated as mass killers under the Suharto regime, to stage for the camera, with his “technical” assistance, the history of their glorious actions. These “movie gangsters,” in love with the Hollywood cinema, adopt the conventions of genre: the film noir, the musical, the western. But enormous cracks appear in their mise en scène that Oppenheimer exploits to expose the throbbing pain of guilt underneath.