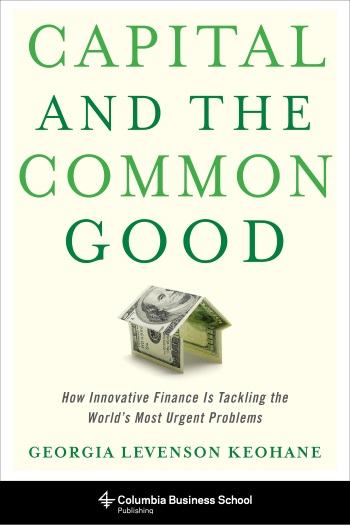 “Yet we have seen how interventions that view refugees as potential assets, not liabilities, are not only cost-effective, but the seeds of prosperity and peace.” — Georgia Levenson Keohane, Andrew Billo, John Kluge and Christine Mahoney

This week, our featured book is Capital and the Common Good: How Innovative Finance Is Tackling the World’s Most Urgent Problems, by Georgia Levenson Keohane. Today, we are happy to share an excerpt from an article by Keohane, Andrew Billo, John Kluge and Christine Mahoney that was originally posted at New America.

Don’t forget to enter our book giveaway for a chance to win a free copy of Capital and the Common Good.

What if, for starters, we understood that this problem was not going to resolve itself in a matter of months and removed the basic barriers to work allowing people fleeing their homes— a dislocated but often skilled labor force—to contribute, productively, to their new communities? This is not a simple task; in places like Lebanon, already high unemployment means that absorbing millions of working age Syrians is economically, and politically, complex.

Yet we have seen how interventions that view refugees as potential assets, not liabilities, are not only cost-effective, but the seeds of prosperity and peace. Consider the recent aid-for-trade deal between the European Union and Jordan, home to 650,000 Syrian refugees. Jordan will issue work permits to Syrians—20,000 issued to date, another 78,000 forthcoming—in exchange for EU aid and relaxed import duties for Jordanian manufacturers who employ Syrians.

Not surprisingly, some of the bright spots on the ground come from local microfinance organizations with long-standing experience in employment and small business development. For example, Kiva, an on-line platform for microlending, is working through local organizations to provide microloans and other supports to refugees in both Palestine and Lebanon, where it also matches aspiring Syrian refugee entrepreneurs with the established Lebanese businesses. Al Majmoua, which, with 50,000 Lebanese clients, is the largest microfinance institution in Lebanon, now assists thousands of Syrian refugees, often women heads of household, offering training and credit. Al Majmoua is also piloting group lending to associations of Syrian and Lebanese women to promote income generating activities and better social cohesion. Capital for this type of microfinance activity could come from established Kiva-like intermediaries, or from public-private enterprise funds, not unlike those created by the State Department and seeded by USAID.

Appetite is also growing from social impact investors. The Alight Fund, for example, has been raising capital from private and public sources to invest in displaced and host community entrepreneurs as an antidote to conflict. George Soros’s recent announcement that he would be investing $500 million along these lines is another critical step in this direction.

While these new sources of capital are vital, however, recasting the way in which we think about response and relief with a market stimulus lens fosters more innovative approaches within our current aid system. Consider cash transfers—giving people money instead of goods—which have come to play a more prominent role in poverty alleviation generally across the globe. In 2015, governments made more than $550 billion in cash transfers to 1 billion people in developing countries. Cash transfers have been rigorously evaluated across Africa, Asia, and Latin America, and have been shown to reduce poverty and improve lives, serving as the de facto safety net in many poor countries. Although in-kind aid is still the predominant form of assistance around the world, cash transfers and vouchers are being used more frequently in the humanitarian context. The World Food Program (WFP), for example, now refers to itself as a food assistance rather than a food aid agency because of the significant increase in its use of cash to people to purchase food. In 2015, 98 percent of its $1 billion food assistance to Syrian refugees in Egypt, Iraq, Turkey, Jordan, and Lebanon took the form of food vouchers. When and where local markets are functioning, cash allows people to choose the goods and services they need, stimulating the local economy, and this stimulus—what economists call a positive multiplier effect—can speed the recovery of local communities.

Read the article in full at New America.