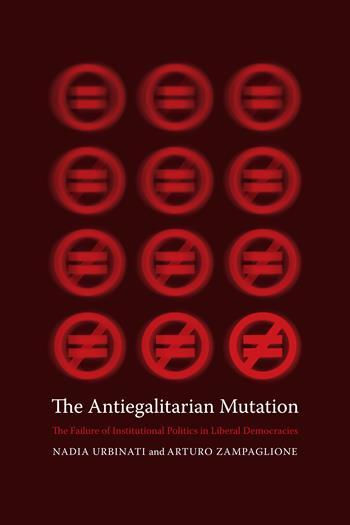 “Can democracy fail to resist the increase in inequality and poverty without becoming distorted? And for how long will democracy be able to withstand the pressure of all the political movements that call for the exclusion, rather than the inclusion, of entire segments of the world population without transmuting into something other than itself? And ﬁnally, why is it in the name of pre-political entities, such as ethnicity, the ancestral bond with a territory, or blind allegiance to a speciﬁc interpretation of a sacred text, that exclusion is desired?” — Nadia Urbinati

This week, our featured book is The Antiegalitarian Mutation: The Failure of Institutional Politics in Liberal Democracies, by Nadia Urbinati and Arturo Zampaglione, translated by Martin Thom. Today, we are happy to present a short essay introducing Urbinati’s project.

Don’t forget to enter our book giveaway for a chance to win a free copy of The Antiegalitarian Mutation!

Over a span of a hundred years, two vastly diﬀerent U.S. presidents chose Osawatomie, a small settlement located at the conﬂuence of two rivers in southern Kansas, as an emblem of their country’s bond of solidarity. In Osawatomie, whose name is a compound of two Native American tribes, the Osage and the Pottawatomie, both presidents spoke of the common good as a higher value than the preferences of the isolated individual. In a speech that is often quoted as an example of presidential eloquence, on August 31, 1910, Theodore Roosevelt, a Republican president, for the ﬁrst time explicitly warned the United States against its libertarian temptations: only a strong government, he argued, would be able to regulate the economy and guarantee social justice. It was again in Osawatomie that, on December 6, 2011, Barack Obama, a Democratic president, voiced his most passionate denunciation of rising economic inequality. “This is the deﬁning issue of our time,” Obama thundered, to rapturous applause. “This is a make-or-break moment for the middle class, and for all those who are ﬁghting to get into the middle class.”

While political analysts from across the spectrum interpreted Obama’s words as touching a populist chord, in raising the issue of inequality Obama was in fact echoing a language of protest: a protest that started in the Middle East as a cry against autocracy and injustice and then spread to many other areas of the world where the issue of rising economic inequality became a focus point. From Tahrir Square in Cairo, Egypt, to the Indignados (Outraged) of the Iberian Peninsula, from Zuccotti Park, next to Wall Street in lower Manhattan, to the Pearl Roundabout, a crossroads on the outskirts of the business district in Manama, Bahrain, the same matrix of discontent rallied crowds of disenfranchised, oppressed, and unemployed citizens who, under the banner of “occupation,” did the opposite of populism: they reclaimed ownership of the public, by the public, and for the beneﬁt of the public. This book was born from the need to understand the signiﬁcance of this complex and incendiary context, which was set against the background of the fragmentation and seeming privatization of the democratic agenda, embraced by secessionist and xenophobic movements all over the planet. The task of framing a response (or a tentative response) to the emergence of such contradictory forces in our time was what drove Arturo Zampaglione (a journalist correspondent from New York for the newspaper La Repubblica) and myself to have a dialogue on inequality as a force that is changing our societies from within, impressing sometime a mutation of people’s ways of thinking that is extraordinary and open to disuniting change in the tenor of our democracy.

Rising socioeconomic inequality and divisive identity politics and originalist ideologies: these are certainly separate phenomena, but are not wholly disconnected. Some questions are asked in this book that can orient us in analyzing these phenomena, for instance, “Can democracy fail to resist the increase in inequality and poverty without becoming distorted? And for how long will democracy be able to withstand the pressure of all the political movements that call for the exclusion, rather than the inclusion, of entire segments of the world population without transmuting into something other than itself? And ﬁnally, why is it in the name of pre-political entities, such as ethnicity, the ancestral bond with a territory, or blind allegiance to a speciﬁc interpretation of a sacred text, that exclusion is desired?” In posing these questions we implicitly suggest that it is more profitable to our understanding to see democracy as in danger of mutating rather than shrinking and in the end destroying itself. This “mutation” has to do with a kind of hijacking of the “promises” of democracy by elitist enclaves and national-populist ideologies, which are well on the way to turning democracy’s universalist aspirations into particularistic projects. The issue of socioeconomic inequality, coupled with the practice of identitarian segregation, plays a key role in the increasing privatization and intrinsic perversion of democratic life.

Democracy does not harbor a predetermined goal, as is the case for Francis Fukuyama and other theorists broadly located in the Hegelian tradition, for whom democracy is a teleological ﬁnality, a stage of development that political communities will eventually evolve into, mostly for their own good. And it is also not an ideal society or a standard of perfection that shapes our conception of the good life. Democracy is grounded in the hard work of establishing relations of equal political freedom among citizens who are diﬀerent in many respects but whose citizenship, taken in the broadest and most inclusive sense of that term, involves full participation in the life of the polity and the process of making opinions and decisions. In line with this nonteleological and antiperfectionist approach, democracy does not any promises concerning when and whether justice and equality could eventually be served. Rather, the principle of equal political liberty that qualifies it makes its citizens capable of articulating a set of “situated” conditions aimed at a progressive work of criticism and rectiﬁcation of their experienced social and economic inequalities. Its rooted in the present not an ideal future makes sense of the emancipatory power of democracy, which can be defined as “a process of diﬀusion of political power,” a system of procedures and norms and a political practice by which ordinary citizens form, express, criticize and try to actualize their judgments on their social life together under the same laws.

Based on this generalization, it appears that the most pressing question of our time, and a challenge to democracy citizenship comes from the transformation of the social and political relations associated to labor. What happens to our democratic citizenship when labor is increasingly deprived of rights and when the risk of poverty, through unemployment, becomes a structural condition of life. Impoverished workers and workers without voice and bargaining power is dramatic condition of our age and a grave threat to democratic agency. Short-term contracts often pave the way to future poverty. Work without rights is a passport to destitution. The present has just as many risks, not only because there is an objective diminution in employment opportunities but also because of the practice of accepting work without rights, work for the present, without any assurances for the future. Propaganda against tenured jobs—for the most part orchestrated by those who, like university professors and economists, already have them—leaves one speechless. As we know, ideologies help us swallow bitter pills. For sure inequality is a structural condition of capitalism, as Thomas Piketty argued convincingly. However, the antiegalitarian mutation also has political roots and brings us to the ideological war against the welfare state and its social-democratic ideology, and the consequent erosion of equality; it is the child of the neoliberal turn that through the years has contributed to a paradigm shift of global proportion, an ideological program that was able to reverse the direction of state policies and obtain widespread consent in Western democracies and by precisely those who suffered the most their effects.