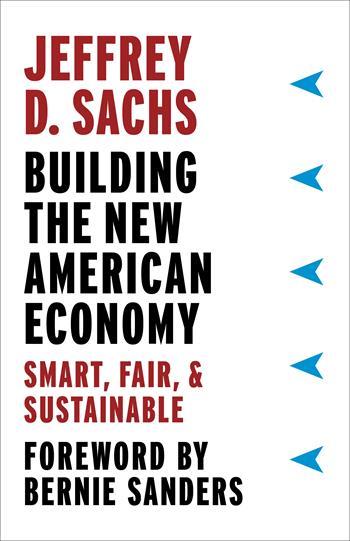 “The key to resolving America’s ills depends on greater fairness, decency, and honesty lie within our own borders, notably on how we share the benefits of advanced technologies such as robotics and artificial intelligence, and the booming profits they are producing. The real counterpart of falling American working-class incomes is not the rise of Mexican incomes but the soaring profits and incomes now going to the 1 percent. The key solutions for American workers are right at home, not in overseas military adventures, new arms races or self-defeating trade wars.” — Jeffrey Sachs

This week, our featured book is Building the New American Economy: Smart, Fair, and Sustainable, by Jeffrey D. Sachs, with a foreword by Bernie Sanders. For today’s post, we feature a roundup of some of Sachs’ recent writing for major national newspapers.

This past month, Professor Sachs has contributed multiple op-eds to The Boston Globe just a few of which we will describe here. On February 5th, he wrote on “Donald Trump’s dangerous China illusions,” exploring China’s recent history as an emerging global superpower and warning that the United States can no longer assume that it maintains primacy in world affairs as President Trump has argued. On January 29th, Prof. Sachs argued in “The balance sheet on ‘America First’” that only one of President Trump’s economic assertions has a grain of sense in it: that there should be a cutback in federal military spending. Otherwise, Sachs asserts, Trump’s directions in trade and investment policies are misguided. Third, in January 22nd’s “The shifting global landscape,” Prof. Sachs looks back at the publication in 1776 of Adam Smith’s foundational economic text The Wealth of Nations and finds parallels to today’s global climate that indicate a changing of the guard in how we think about and experience economic issues.

Sachs has also written frequently for Project Syndicate, where this month he published pieces on “Why Millenials Will Reject Trump” – the keys are their diversity, the particular nature of the economic challenges they face, and their awareness of the effects of climate change – and on “Learning to Love a Multipolar World,” exploring the roots of the vastly changed position the United States finds itself in in international politics.