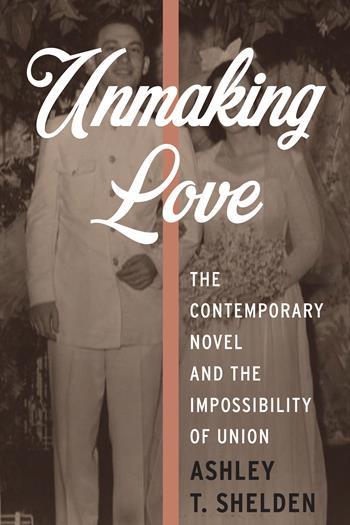 “What I see in contemporary literature—in novels that I discuss in the book and those that didn’t make it in—is an understanding of love that runs counter to [a] traditional story. In these novels, love is not a uniting, conservative, or peaceful force; love is more often aggressive, violent, divisive, and corrosive.”—Ashley Shelden, author of Unmaking Love: The Contemporary Novel and the Impossibility of Union

The following is an interview with Ashley Shelden, author of Unmaking Love: The Contemporary Novel and the Impossibility of Union:

Question: Love is typically seen as sentimental and conservative, and perhaps because of that, other queer theorists and critics tend to focus on desire or sex. With this in mind, why are you so interested in love?

Ashley Shelden: It’s not that I’m not interested in desire or sex as analytic categories. Indeed, so much of the theoretical and intellectual work in psychoanalysis and queer theory that has galvanized me focuses on these concepts. Motivated by this work, I wanted to think more deeply about love in theory and literature in order to rethink the uses to which it has been put both intellectually and politically. In this way, my project is in sympathy with Laura Kipnis’s Against Love. I don’t necessarily agree with Kipnis’s arguments in that book, but I am invigorated by her impressive capacity not to accept received ideas and her commitment to putting pressure on all our assumptions about love.

I think you’re right, then: love is often used coercively as a sentimental force of conservation—to maintain the primacy of marriage, to occlude differences, to pacify and render inert disruptions to the dominant order. But what I see in contemporary literature—in novels that I discuss in the book and those that didn’t make it in—is an understanding of love that runs counter to this traditional story. In these novels, love is not a uniting, conservative, or peaceful force; love is more often aggressive, violent, divisive, and corrosive. It’s this unfamiliar version of love in which I am most interested because it flies in the face of what we commonly assume love to be.

Q: It sounds like part of what appeals to you about the alternative account of love that contemporary novels articulate is the light these novels can shed on politics. What political concerns does love allow you to consider anew?

AS: Let me just say here that when I think about the political uses of love, I don’t have in mind a sense of politics as partisan. By “political” I mean the ways we adjudicate on relations within the social. I want to clarify this point because my book is not necessarily suggesting new definitions of love for progressive political ends. Instead, my aim is to think about the ways that love is used to organize—and indeed disorganize—sociality. In that way, the political relations that love informs are quite broad. The first political issue that we might think of in relation to love is, of course, same-sex marriage, the mantra for which is “love is love.” But beyond the intimate sphere of loving relations, love also pertains to the recognizably contemporary issue of relationality in a globalized, transnational world. In the book, I use Kazuo Ishiguro’s The Unconsoled and Hari Kunzru’s Transmission in order to think through the amorous dimensions of transnational connectedness.

Another political issue that the question of love brings to the fore is the question of “the other” and otherness. Jacques Lacan famously suggested that there can be no love for an other, and we can only love sameness, that which reflects back to us the image of ourselves. This idea enlivens my project as it concerns issues relating to ethics—if love is directed only at sameness, then this idea suggests that there is something destructive in love’s seemingly unifying force. In order to love another, I must obliterate the other’s otherness, making that person into a fictional reflection of myself, which effectively eradicates the other in her particularity.

AS: My answer to this question has to begin with Barbara Johnson—her astonishing body of work informs every page of the book. In particular, her essay “Using People: Kant with Winnicott,” helps me to formulate the theoretical foundation of a love that doesn’t simply heal wounds and create union. In this fabulous essay, Johnson illustrates a love that is if not solely, then at least primarily destructive: if you love something, or someone, then you wound it. In this way, love does not alleviate but actually harbors negativity. Now, if we return to gay marriage, the mantra “love is love” asserts that all love—but particularly straight and gay love—is the same and as such, it is a unifying force. What underpins this idea is that the sameness of love cuts through all differences, crosses class, traverses national divisions, and transcends time. Not only is this factually untrue (i.e., love has not always been the same, nor is it the same in different cultures), but this claim is also an illusion. The contemporary novel suggests that love is the site of difference, division, and fissure. This suggestion is what the title of the book refers to: such negativity and division “unmake” love. My claim, then, is that this queered idea of love requires that we rewrite the battle-cry of gay marriage, “love is love,” as “love is not love.” Such a revision foregrounds the negativity and dividedness that love harbors, making the sameness and union that love seems to promise impossible.

Q: Here, you allude to part of the subtitle of your book, “the Impossibility of Union.” To what sorts of unions are you referring? And what do you mean by impossibility?

AS: The predominant model of union that I discuss in the book is, of course, romantic love. Indeed, every chapter of the book discusses romantic relationships in one way or another, and the traditional romantic couple is the primary model for the union to which I refer. However, the romantic couple is not the exclusive locus of union—in either the book or in life—and so the “unmaking” of romantic love is only one permutation of “the impossibility of union.” I understand “union” throughout the book to be an idea, a general concept, and the romantic couple is one particular instance—but not the only one—of this abstract idea. Just as the love of the couple is “unmade” by the contemporary novel, so too is the very idea of union itself. For this reason, the novels I discuss do not restrict their reimagining of love and union to the domain of the couple; they extend their critiques to the family, the nation, the globe, history, and time. The “union” to which I refer in the title can be thought of as a plural noun—“union” corresponds to a multiplicity of referents, which itself suggests the impossibility of which I write.

So, impossibility: what I mean by this word, particularly in its specific relation to union, is that love thwarts rather than facilitates any attempt at totalization, any impulse toward fusion. And we can go one step further: love doesn’t just fail to produce the unity and fusion for which it strives, but it also demands that we recognize that no union is to be had anywhere. Union, completion, closure, repletion, and wholeness cannot exist.

Q: You were trained as a modernist. Your book, while it examines some modernist novels, focuses more on the contemporary novel. What is the relation between modernist and contemporary accounts of love?

AS: This project originally began as a study primarily of modernism, with a couple of contemporary texts added to the conversation. As I delved deeper into my subject matter, however, I found that the continuity I originally posited between modernist and contemporary texts did not hold. I reoriented the project toward the contemporary in order to focus on the distinct contribution contemporary writers are making to the conversation about love. Of course, we can see in modernism clear attempts to rethink love. Writers like Djuna Barnes, Joseph Conrad, Ford Madox Ford, James Joyce, D.H. Lawrence, and Virginia Woolf (to name a few) notice that there is something amiss with the idea of love as a unifying, fusional force (I discuss some, but not all, of these writers in the book).

We also find, however, that even as modernist authors want to re-envision love, they cannot completely let go of the idea that love creates union. Modernists, I therefore suggest, are ambivalent about love. Contemporary novelists build on these modernists’ attempts to rethink love, taking this experiment to its logical conclusion, letting go completely of the idea that love can save us, that it can bring us together, that it can heal wounds. We find in contemporary novels both continuity with, and difference from, their modernist precursors. Writers like Eleanor Catton, Alan Hollinghurst, Hari Kunzru, David Mitchell, Zadie Smith, and Edward St. Aubyn build on modernist ideas and aesthetics, refracting and fragmenting the earlier writers’ concerns. These contemporary authors explode the idea of love, exposing the ways that love fails to unify, divides us from each other, and works as not a uniting but a corrosive force.