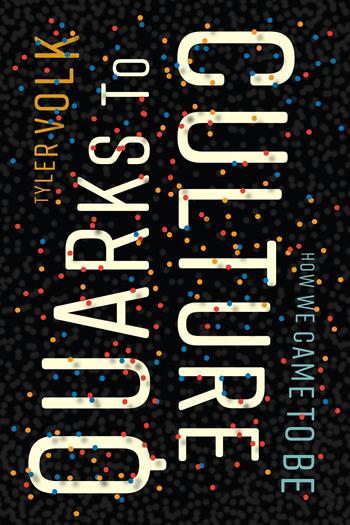 “What were the innovations that developed along the forward path in time that went from quarks to culture to form a sequence of transitions to new fundamental levels? To help focus, I coined the term ‘combogenesis.’ Combogenesis is the genesis of new types of things and relations by combination and integration of previously existing things.” — Tyler Volk

This week, our featured book is Quarks to Culture: How We Came to Be, by Tyler Volk. Today, we are happy to present a short excerpt from an interview that with John Horgan at Scientific American‘s Cross-Check blog. You can read the interview in full at the Cross-Check website.

How Quarks Turned into Cultures: Big-picture biologist Tyler Volk talks about his book on “How We Came to Be”
By John Horgan

In answering the question about a count I was led onward to a next one: What were the innovations that developed along the forward path in time that went from quarks to culture to form a sequence of transitions to new fundamental levels? To help focus, I coined the term “combogenesis.” Combogenesis is the genesis of new types of things and relations by combination and integration of previously existing things. For those into “emergence” theory, I would say that combogenesis is a special subset of emergence. But combogenesis is more precisely defined and leads to a logical way to distinguish levels and then ask questions about contrast and comparison across levels. Its use is restricted in this book to the levels that built-up a “grand sequence,” from the fundamental particles of physics through biology and to geopolitical states….

A related concept is offered in the book’s Part 3: combogenic convergence. Once one has in hand the levels of combogenesis as a set of similar “things,” one can ask about themes or parallels within that set. Examples include parallels in the levels that originated biological and cultural evolution (respectively, prokaryotic cells and human tribal metagroups), and in the levels that followed those “evolutionary base levels” (respectively, eukaryotic cells and agrovillages).

Could the next great transformation spawned by combogenesis be what some call the Singularity?

The final level I cover is the geopolitical state. It originated thousands of years ago at different sites around the world at different times. The obvious question is, what happens next? The logic of combinogenesis would indicate a merger of nations. I see nations as cultural evolutionary descendants of the ancient states, all on the same level of the geopolitical state, similar to the way that ancient simplest animals and modern large mammals are on the same level of multicellularity.

Now the logic of combogenesis would indicate that for a planetary scale to develop as a truly new level in the grand sequence, that scale will not take place from the domination by any current government or government system. Were that to become the case, it would not be a substantial innovation but simply an increase in size of a current pattern. Thus the logic leads us to think more radically about the structures that might result in a coming planetary stage.
Now, those into the Singularity—where cheap machines match and then surpass human general intelligence—can spin scenarios of utopias or dystopias. I agree with Nick Bostrom, we need to be thinking about the matter of AI a lot more. The internet-AI is participating in the coming planetary scale. In fact, we all need to be thinking and talking about and debating the human future a lot more, rather than simply letting it happen or letting certain powerful individuals in government, tech, or finance determine it (a complex topic, because voters and consumers weigh in). I tend to think about new international “organs” of the planetary scale. Please, no Borg-like future. I personally lean toward a desirably complex world but one more decentralized across multiple modalities compared to today.

Personal, cognitive evolutionary dynamics (one’s internal decision-making, with its evolutionary “recipe” of processes of propagation, variation, and selection) need to be part of this evolution toward planetization. After all, important structures of cultural evolution are linked to patterns laid down in earlier levels of the grand sequence. Specifically, the animal body (level 8) participates in the next level of the animal social group (level 9), with the animals themselves remaining the main unit of evolutionary adaptation, because the animal body had and has a life cycle that involves death and therefore was subject to intense selection. In our genus Homo ancestry, this led to increased brain size and new cognitive capabilities. Despite our current lives in multiply nested social systems, we have inherited this intense degree of individuality from several levels down. Let us keep that, even if a planetary scale is coming into being.

We need more imagination about all this. David Grinspoon, for example, in his book Earth in Human Hands, is wonderfully on the case here, proposing a “Sapiezoic aeon” to come (if we are successful). My hope is that pattern-thinking-tools developed from the grand sequence and prior transitions of combogenesis can help contribute to such new imaginings of our future.

Read the article in full at Scientific American’s Cross-Check blog.