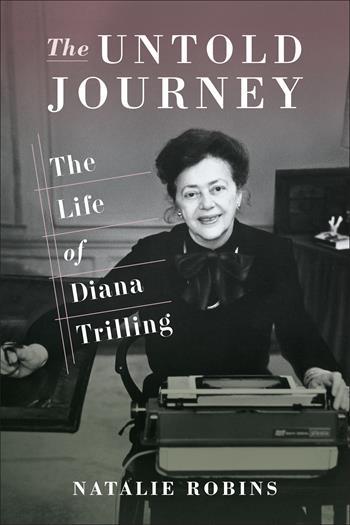 “‘The last time I was in this theater,’ Dupee began quietly, ‘it was also to hear a poet read his works. That was T. S. Eliot.’ A slight alteration of inflection, from iron to mockery, from condescension to contempt, and it might well have been a signal for a near-riot, boos and catcalls and whistlings; the evening would have been lost to the ‘beats,’ Dupree and Columbia would have been defeated. Dupee transformed a circus into a classroom…. One could feel nothing but pity for Ginsberg and his friends that their front of disreputableness and rebellion should be this transparent, this vulnerable to the seductions of a clever host. With Dupee’s introduction, the whole of their defense had been penetrated at the very outset.” — Diana Trilling

This week, our featured book is The Untold Journey: The Life of Diana Trilling, by Natalie Robins. Today, we are happy to present an excerpt from an article by Diana Trilling, originally published in the Partisan Review. You can read the article in full at the website of Boston University’s Howard Gotlieb Archival Research Center, in the Partisan Review, Vol. 26, No. 2, page 214. In “The Other Night at Columbia: A Report from the Academy,” Trilling describes her experience attending a poetry reading by Allen Ginsberg, Peter Olovsky, and Gregory Corso at Columbia University. For additional context, we have also excerpted a description from The Untold Journey of the way that “all hell broke loose” upon the publication of this article.

Don’t forget to enter our book giveaway for a chance to win a free copy of The Untold Journey!

The Other Night at Columbia: A Report from the Academy
By Diana Trilling

The “beats” were to read their poetry at Columbia on Thursday evening and on the spur of the moment three wives from the English department had decided to go to hear them. But for me, one of the three, the spur of the moment was not where the story had begun. It had begun much farther back, some twelve or fourteen years ago, when Allen Ginsberg had been a student at Columbia and I had heard about him much more than I usually hear of students for the simple reason that he got into a great deal of trouble which involved his instructors, and had to be rescued and revived and restored; eventually he had even to be kept out of jail. Of course there was always the question, should this young man be rescued, should he be restored? There was even the question, shouldn’t he go to jail? We argued about it some at home but the discussion, I’m afraid, was academic, despite my old resistance to the idea that people like Ginsberg had the right to ask and receive preferential treatment just because they read Rimbaud and Gide and undertook to put words on paper themselves. Nor was my principle (if one may call it that) of equal responsibility for poets and shoe clerks so firm that I didn’t need to protect it by refusing to confront Ginsberg as an individual or potential acquaintance. IO don’t mean that I was aware, at the time, of this motive for disappearing on the two or three occasions when he came to the house to deliver a new batch of poems and report on his latest adventures in sensation-seeking. If I’d been asked to explain, then, my wish not to meet and talk with this troublesome young man who had managed to break through the barrier of student anonymity, I suppose I’d have rested with the proposition that I don’t like mess, and I’d have been ready to defend myself against the charge, made in the name of art, of a strictness of judgment which was intolerant of this much deviation from respectable standards of behavior. Ten, twelve, fourteen years ago, there was still something of a challenge in the “conventional” position; I still enjoyed defending the properties and proprieties of the middle class against friends who persisted in scorning them. Of course, once upon a time — but that was in the ’30’s — one had had to defend even having a comfortable chair to sit in, or a rug on the floor. But by the ’40’s things had changed; one’s most intransigent literary friends had capitulated by then, everybody had a well-upholstered sofa and I was reduced to such marginal causes as the Metropolitan Museum, after-dinner coffee cups, and the expectation that visitors would go home by 2 A.M. and put their ashes in the ashtrays. Then why should I not also defend the expectation that a student at Columbia, even a poet, would do his work, submit it to his teachers through the normal channels of classroom communication, stay out of jail, and then, if things went right, graduate, start publishing, be reviewed, and see what developed, whether he was a success or failure?

Well, for Ginsberg, things didn’t go right for quite a while. The time came when he was graduated from Columbia and published his poems, but first he got into considerable difficulty, beginning with his suspension from college and the requirement that he submit to psychiatric treatment, and terminating — but this was quite a few years later — in an encounter with the police from which he was extricated by some of his old teachers who thought he needed a hospital more than a prison. The suspension had been for a year, when Ginsberg had been a Senior; the situation was not without its grim humor. It seems that Ginsberg had traced an obscenity in the dusty windows of Hartley Hall; the words were too shocking for the Dean of Students to speak, he had written them on a piece of paper which he pushed across the desk: “F— the Jews.” Even the part of Lionel that wanted to laugh couldn’t, it was too hard for the Dean to have to transmit this message to a Jewish professor — this was still in the ’40’s when being a Jew in the university was not yet what it is today. “But he’s a Jew himself,” said the Dean. “Can you understand his writing a thing like that?” Yes, Lionel could understand; but he couldn’t explain it to the Dean. And anyway, he knew that the legend in the dust of Hartley Hall required more than an understanding of Jewish self-hatred and also that it was not the sole cause for administrative uneasiness about Ginsberg and his cronies. It was ordinary good sense for the college to take therapeutic measures with Ginsberg.

For me, it was of some note that the auditorium smelled fresh. The place was already full when we arrived; I took one look at the crowd and was certain that it would smell bad. But I was mistaken. These people may think they’re dirty inside and dress up to it. Nevertheless, they smell all right. The audience was clean and Ginsberg was clean and Corso was clean and Orlovsky was clean. Maybe Ginsberg says he doesn’t bathe or shave; Corso, I know, declares that he has never combed his hair; Orlovsky has a line in one of the two poems he read — he’s not yet written his third, the chairman explained — “If I should shave, I know the bugs would go away.” But for this occasion, at any rate, Ginsberg, Corso and Orlovsky were all clean and shaven; Kerouac, in crisis, didn’t appear, but if he had come he would have been clean and shaven too — he was at Hunter, I’ve inquired about that. And anyway, there’s nothing dirty about a checked shirt or a lumberjacket and blue jeans, they’re standard uniform in the best nursery schools. Ginsberg has his pride, as do his friends.

And how do I look to the “beats,” I ask myself after that experience with the seats, and not only I but the other wives I was with. We had pulled aside the tattered old velvet rope which marked off the section held for faculty, actually it was trailing on the floor, and moved into the seats Dupee’s wife Andy had saved for us by strewing coats on them; there was a big grey overcoat she couldn’t identify: she stood holding it up in the air murmuring wistfully, “Whose is this?” — until the young people in the row in back of us took account of us and answered sternly, “Those seats are reserved for faculty.” If I have trouble unraveling undergraduates from “beats,” neither do the wives of the Columbia English department wear their distinction with any certainty.

But Dupee’s distinction, that’s something else again: what could I have been worrying about, when had Dupee ever failed to meet the occasion, or missed a right style? I don’t suppose one could witness a better performance than his on Thursday evening; its rightness was apparent the moment he walked onto the stage, his troupe in tow and himself just close enough and just enough removed to indicate the balance in which he held the situation. Had there been a hint of betrayal in his deportment, of either himself or his guests — naturally, he had made them his guests — the whole evening might have been different: for instance, a few minutes later when the overflow attendance outside the door began to bang and shout for admission, might not the audience have caught the contagion and become unruly too? Or would Ginsberg have stayed with his picture of himself as poet serious and triumphant instead of succumbing to what must have been the greatest temptation to spoil his opportunity? “The last time I was in this theater,” Dupee began quietly, “it was also to hear a poet read his works. That was T. S. Eliot.” A slight alteration of inflection, from iron to mockery, from condescension to contempt, and it might well have been a signal for a near-riot, boos and catcalls and whistlings; the evening would have been lost to the “beats,” Dupree and Columbia would have been defeated. Dupee transformed a circus into a classroom…. One could feel nothing but pity for Ginsberg and his friends that their front of disreputableness and rebellion should be this transparent, this vulnerable to the seductions of a clever host. With Dupee’s introduction, the whole of their defense had been penetrated at the very outset.

There was a meeting going on at home of the pleasant professional sort which, like the comfortable living-room in which it usually takes place, at a certain point in a successful modern literary career confirms the writer in a sense of disciplined achievement and well-earned reward. I had found myself hurrying as if I were needed, but there was really no reason for my haste; my entrance was an interruption, even a disturbance of the attractive scene. Auden, alone of the eight men in the room not dressed in a proper suit but wearing his battered old brown leather jacket, was first to inquire about my experience. I told him I had been moved; he answered that he was ashamed of me. I said, “It’s different when it’s a sociological phenomenon and when it’s human beings,” and he of course knew and accepted what I said. Yet as I prepared to get out of the room so that the men could sit down again with their drinks, I felt there was something more I had to add — it was not enough to leave the “beats” only as human beings — and so I said, “Allen Ginsberg read a love-poem to you, Lionel. I liked it very much.” It was a strange thing to say in the circumstances, perhaps even a little foolish. But I’m sure that Ginsberg’s old teacher knew what I was saying, and why I was impelled to say it.

Read the article in full at the website of Boston University’s Howard Gotlieb Archival Research Center, in the Partisan Review, Vol. 26, No. 2, page 214.