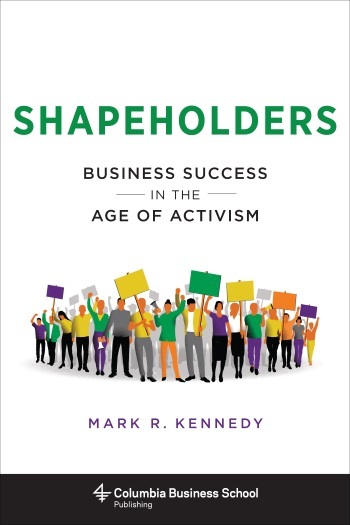 “Kennedy began teaching courses on business statesmanship and business success in the age of activism. He conducted a research project at the University of Pennsylvania, taught at Johns Hopkins, HEC Paris, New York University, and Notre Dame. Later, he was recruited to George Washington University, where in addition to leading a school, he taught a MOOC (Massive Open Online Course) on Shapeholders and led courses on public affairs around the world.” — Jan Orvik

This week, our featured book is Shapeholders: Business Success in the Age of Activism, by Mark R. Kennedy. For the final post of the week, we are happy to present an excerpt from an article by Jan Orvik that originally appeared in UND Today. You can read the article in its entirety here.

The subject of a new book by UND President Mark Kennedy, Shapeholders: Business Success in the Age of Activism, zeroes in on how political, regulatory, media and activists can shape – or shift – business practices.

The “shapeholders” term was coined by Kennedy’s son, Charles.

“The main point of the book, which was released on May 9, is that you have stakeholders, shareholders and shapeholders,” Kennedy said. “Shapeholders are different than stakeholders or shareholders. They are the politicians, media and activists who can shape a firm’s opportunities and risk, even though they have no stake in an organization’s success.”

For example, Kennedy said, employers and suppliers can push companies to change, but there are limits to how far they can go because they have a stake in the success of those organizations. Activists, who often don’t have stake in a company, can cause conflict. As Kennedy observed, “the only stake an environmental activist may want in a coal company is a stake through its corporate heart, yet that activist can still shape the opportunities and risks of a coal company.”

“Companies are often out of their element when talking to shapeholders, resulting in more conflict,” said Kennedy. His book discusses engaging shapeholders in the long term to both advance business and benefit society.

Trip around the world

The book is a result of Kennedy’s global expertise.

After he left Washington, D.C., the former Minnesota Congressman took a trip around the world. Like the protagonist in the classic adventure novel, Around the World in Eighty Days by Jules Verne, he began in London and spoke at the Reform Club, which was founded in 1836. Kennedy’s talk, “Focus to Finish First,” postulated that the world is now so global and competitive that there is no choice but to be No. 1 in what you do.

Read the rest of the article at UND Today.