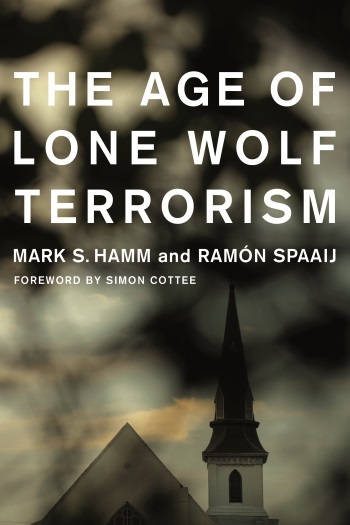 “Because the FBI’s sting program concentrates its resources primarily in Muslim-American communities, critics charge that the FBI has eroded community trust in those areas, instigated fear, and silenced dissent necessary for participatory democracy. Moreover, say the critics, the United States is manufacturing terrorism by entrapping innocent Muslims.” — Mark Hamm and Ramón Spaaij

This week, our featured book is The Age of Lone Wolf Terrorism, by Mark S. Hamm and Ramón Spaaij, with a foreword by Simon Cottee. Today’s article originally appeared on the Columbia University Press blog in June, but we are happy to repost it with some revisions made based on recent events.

Don’t forget to enter our book giveaway for a chance to win a free copy of the book!

Say what you will about James Comey—to his supporters the fired FBI Director is a bona fide American hero while President Trump has derided him as a “showboat” and a “nut job”—but of this we can be sure: Comey’s revelations about Donald Trump’s possible attempt to obstruct justice in the investigation of Russia’s interference in the 2016 elections has deflected public attention away from Comey’s performance as the nation’s top law enforcement official in the fight against domestic terrorism. He has much to answer for. The United States experienced more than two dozen terrorist attacks on Comey’s watch (September 2013-May 2017), including the ISIS-inspired mass shootings in San Bernardino and Orlando, along with shooting rampages by homegrown jihadists and anti-government extremists in Kansas, South Carolina, Texas, Tennessee, Louisiana, Colorado, and Oregon. In all, more than two-hundred were killed or wounded in these attacks, including a number of police officers. The most lethal attacks were perpetrated by atomized “lone wolf” terrorists.

A major approach to preventing lone wolf terrorism in the United States is an aggressive FBI sting program designed to catch terrorists before they strike. Inaugurated by the Bush administration after 9/11, the FBI’s sting program became the nation’s leading preemptive counter-terrorism strategy during Comey’s tenure as director. In February 2015, at the peak of his influence, Comey announced that the bureau had investigations into “homegrown violent extremism” in all fifty states. Most were sting operations against suspects with an affinity for al-Qaeda and ISIS.

Sting investigations begin when the FBI identifies a person who expresses interest in joining a terrorist group, be it jihadist, white supremacist, or other forms of extremism. Undercover FBI agents and confidential informants are then tasked with providing the necessary weapons, money, and transportation to carry out a terrorist attack. Almost always, these attacks involve the planned bombing of buildings, metros, or public gatherings. Once the sting “target” commits an overt criminal act in support of the bombing plot, he (they are mostly males) is arrested and prosecuted under federal terrorism enhancement provisions, which lead to draconian prison sentences. By producing compelling narratives of deadly attacks that they have foiled, FBI officials are able to show the White House and Congress that violent extremism is an imminent threat to national security and thus worthy of multibillion dollar budgets. The strategy is highly controversial.

Critics of the program maintain that those targeted in the stings lack the necessary criminal skill to carry out an attack on their own and that no example exists of a lone wolf becoming operational through meeting an actual terrorist in the United States. Critics further contend that the would-be terrorists are usually uneducated, economically desperate, and vulnerable young men with mental health or drug problems. (Even Comey, in a 2014 interview on 60 Minutes, would refer to lone wolf terrorists as “troubled souls who are seeking meaning in some misguided way.”) Because the FBI’s sting program concentrates its resources primarily in Muslim-American communities, critics charge that the FBI has eroded community trust in those areas, instigated fear, and silenced dissent necessary for participatory democracy. Moreover, say the critics, the United States is manufacturing terrorism by entrapping innocent Muslims.

To empirically investigate such claims, we compared a sample of fifteen would-be bombers targeted in FBI stings, all currently incarcerated in federal prisons, with sixty-seven “authentic” lone wolf terrorists —those who acted alone without government supervision—and made the following discoveries:

These, then, are the verifiable background differences between authentic lone wolf terrorists and those targeted by the FBI for sting operations: Authentic lone wolf terrorists are mainly unemployed white males with a criminal record, who on average are thirty-one years old; those arrested in stings are younger Muslim men from minority backgrounds with stable employment and no criminal past.

The FBI has created a standard procedure for reaching out to individuals who fit this profile, providing them with the ideological support, material backing, and sense of belonging necessary for committing acts of terrorism by killing innocent Americans with improvised bombs, acts that they would be otherwise unable to commit. Similar to the much maligned “broken windows” theory of urban law enforcement, FBI agents and informants typically find their bombers by trawling cyber neighborhoods of the Internet looking for what they call “Kramer Jihadists” (after the bumbling Seinfeld character) who espouse violence against the United States. Apart from its ethical implications, there are criminological issues raised by a policy expressly designed to turn ostensibly harmless people into mass murderers.

The most catastrophic failure of James Comey’s FBI was the bureau’s decision to run a sting operation against Omar Mateen, the Orlando gunman who killed forty-nine and wounded fifty-eight in the deadliest shooting in American history. Mateen came to the FBI’s attention in October 2013, when Mateen (then 26 years old) got into a heated argument with a deputy sheriff at a Florida courthouse where Mateen worked as a security guard. After claiming that he had family connections to the Boston Marathon bombers, Tamerlan and Dzhohkar Tsarnaev, Mateen said he had links to al-Qaeda and further hoped that the FBI would raid his apartment so that he could become a martyr. Then he threatened to kill the deputy sheriff and his family. Due to this portentous encounter, the FBI office in Orlando opened an investigation on Mateen and began a sting setup involving a confidential informant who engaged Mateen in discussions that were intended to encourage his participation in a plot to commit terrorism in the United States. Either because Mateen was too shrewd to accept the proposition, or because he may have become angry that he was being manipulated in this way, Mateen declined the informant’s offer. The FBI’s failed attempt to entrap Mateen into agreeing to carry out a terrorist attack raises the important question of whether Comey’s counterterrorism policy actually backfired, thereby enabling Mateen’s mass murder at the Pulse nightclub during the month of Ramadan 2016.

Unlike the “Kramer Jihadists” routinely targeted in FBI stings, not only was Mateen a true lone wolf who slipped under the radar, he was a “known wolf” who had undergone an extensive FBI investigation and still became a terrorist, who committed a historically lethal attack. At the end of the day, we are left with a simple reality: If the FBI sting program works only with marginal criminals, and not with the real threats like Mateen, then the policy just inflates the FBI’s prosecution numbers without making us safer.