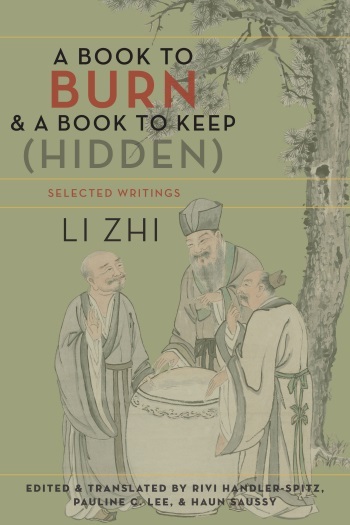 “A rich translation of essays revealing Li Zhi as the epitome of dissent. His tragic suicide culminated Li’s life as a free thinker, but at the same time his enemies immortalized him as someone who had defrocked Ming autocracy of its elegantly woven orthodoxies. He also provided Ming precedents for political repression under the Republic of China and the People’s Republic. The PRC ironically appropriated Li Zhi’s rhetoric, pretending that everyone was now liberated, as long as they towed the party line. Later Pierre Bourdieu honored him as China’s homo academicus!” — Benjamin A. Elman, Princeton University

A Book to Burn and a Book to Keep (Hidden) introduces the controversial Ming scholar Li Zhi through his letters, essays, poetry, and historical writings. Below, we excerpt the volume’s introduction, by editors and translators Rivi Handler-Spitz, Pauline Lee, and Haun Saussy.