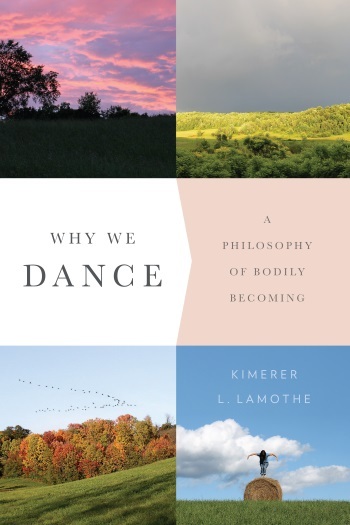 The following is an interview with Kimerer LaMothe, author of Why We Dance: A Philosophy of Bodily Becoming:

Why did you write this book?

Kimerer LaMothe: I love to dance, every day. It is vital for my wellbeing. And when I scan the landscape of human life, I see dance everywhere—in the earliest human art, the oldest forms of culture, and in every culture around the world into the present. Yet in the maps of and for human life that comprise the philosophy, theology, and religious studies of the modern west, dance occupies a surprisingly small space. Rarely do authors consider dancing as vital to human life, especially to a human’s religious life. I wanted to change that.

How did you decide to approach this problem?

KLL: Before beginning this book, I spent years delving into written works of the western canon, trying to identify the intellectual moves that make it nearly impossible for a given philosopher or theologian to affirm dance as a medium of religious experience and expression. I looked for exceptions. I looked for thinkers who were willing to consider dance as more than just a metaphor, or more than just a crude alternative to the “finer” arts or “higher,” more cerebral forms of religion.

The problem went deeper than I thought. The bias against dance in the western tradition is not simply evidence of a mind/body problem, a fear of sexuality, or a patriarchal devaluing of the feminine per se. Rather, the challenge for dance is rooted in the fact that that the tradition’s dominant structures and patterns of thinking express and reinforce the lived experience of people who have spent years training themselves to read and write. Much of western thought is an apology for the life of a book-bound mind.

While this trajectory of cultural development has enabled tremendous advances in numerous realms, it is less helpful when it comes to making sense of why humans always have and continue to dance.

In order to show how dance is vital to our humanity, I realized that I would have to retell the story of what it means to be a human being from the lived experience of dancing. I would have to tell a story in which bodily movement appears as the source and telos of human life.

Fortunately, across disciplines, researchers and scientists are discovering what many dancers have known and practiced for years: that bodily movement is essential to the biological, emotional, spiritual, and ecological development of human persons. Thus, when I set out to write this book, I had a lot of material on which to draw in making my case.

So why do we dance?

KLL: The reasons are many, and each chapter of Why We Dance explores one. We dance to matter, to evolve, to know, to be born, to connect, to heal, and to love. Yet as the text spirals through these different chapters, a common argument builds as the substratum of them all: namely, that humans evolved as creatures with a unique ability to notice, recreate, and become relational patterns of movement. Humans evolved to dance as an enabling condition of their best bodily becoming.

Key to this argument is this notion I develop of “bodily becoming.” It takes three moves to shift to this perspective. First, humans do not have bodies, they are bodies. Second, the bodies that humans are, are not objects, they are movement. Third, the movement that human bodily selves are is the movement of their own becoming. In a nutshell: I am the movement that is making me. Humans are nothing more or less that rhythms of bodily becoming, constantly moving themselves as well as being moved by forces larger and smaller than they can perceive.

In each chapter, I explore the implications of this way of thinking about our bodily selves for philosophical questions concerning the nature, evolution, development, and culture expression of human persons. I build the case that the ongoing practice of dancing is the primary action in which humans learn to participate–consciously or not—in the rhythms of bodily becoming.

You note in the opening to Why We Dance that you live on a farm, and that you could not have written this book anywhere else. Why is that?

KLL: If I was to write a book that expressed the lived experience of dancing, I knew that I needed to live in a place where my own impulse to dance was constantly quickened and brought to life in me—a place where I was moved to move by the movements of the natural world.

When the opportunity came for our family to move to the country, I jumped. Little did I know, that once my partner and I moved to this retired dairy farm, our children would decide that they wanted to be farmers. Supporting our children in fulfilling their dreams of raising horses, cows, cats, and chickens has opened my senses up in new ways to how the movements that we make in every moment of our lives make us who we are in relationship to the natural world.

Each chapter of Why We Dance sports an experiential frame drawn from life I live here on the farm. Each frame enacts ideas I develop within the chapter itself. These experiences are not “cases” that provide evidence of “theories.” Rather, they each describe the experiences that have enabled the ideas of the chapter to emerge in me at all. In this way, each chapter represents a coming-into-being of the ideas about dance that it also contains. Each chapter calls attention not only to the “embodiment” of ideas (as if ideas lived in bodies), but to the ways in which ideas express, engender and are themselves bodily movements.

I am not a dancer. I don’t dance. Why should I read this book?

KLL: Part of what I do in this book is to redefine “dance.” I offer a visionary definition of what dance can be based both on what dancing has been across a range of contexts, as well as on what we now know about the importance of bodily movement to our humanity. Dance, I offer, is something that every human can and must do to some extent in order to survive their births as hopelessly dependent infants. Dance, in this sense, refers to a process of participating as consciously as we are able in the rhythm of creating and becoming relational patterns of sensation and response.

While elastic, this definition offers rich conceptual resources for identifying and acknowledging the wide range of meanings, experiences, beliefs, and knowledge that the practice of certain dance styles and techniques makes possible, especially when occurring in religious contexts. This visionary definition also offers resources for understanding how and why the practice of dancing remains a potent guide for people today in the work of nurturing mutually life-enabling relationships with the natural world.