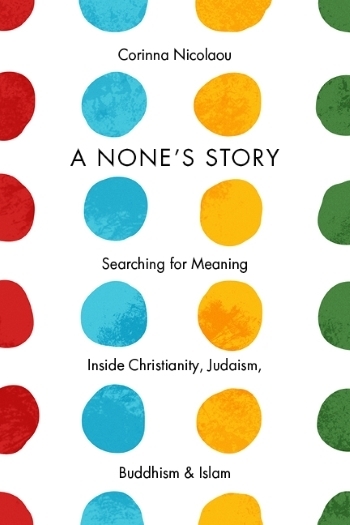 “How quickly one’s isolation can flip into expansive belonging! To suddenly become aware of one’s being present in the room, alongside the presence of others, to contemplate the world anew and then to consider it through alternate perspectives. Worship can help us do this and more; an evening of improv was having a similar effect.” — Corinna Nicolaou

This week, our featured book is A None’s Story: Searching for Meaning Inside Christianity, Judaism, Buddhism, and Islam, by Corinna Nicolaou.

On “Imagine”
Excerpted from A None’s Story, by Corinna Nicolaou

Back at home, I realized it was time to come to some conclusion. What was I? My spiritual house had been spiraling around this strange cyclone for several years. Now, presumably, the winds were dying down and it was time for it to land . . . but where? I kept asking myself: what do you believe? As I was cooking dinner or walking the dogs or waking up first thing in the morning: what do you believe? Then I would take another approach. Just pick one, I would tell myself. Perhaps it wasn’t important what I selected. The goal was to settle in one spot, grow roots, develop, and evolve. I just had to commit to something.

Now I was blogging in real time, and I needed to bring the journey to some conclusion. The problem, as I began to see it, was that in selecting one version of one belief system, I was rejecting all the others—or at least that’s how it felt. In my imagination, I would make my choice. I would picture signing some official declaration of faith. Trumpets would sound. I now had license to declare myself a practicing such-and-such. But this scenario always made my stomach turn. My mind would wander to the options I wasn’t picking, and I would feel queasy at those potential paths I had refused. On some fundamental
level, settling down felt wrong. It occurred to me that perhaps my problem was emblematic of the criticisms regularly hurled at today’s younger generations. Our disengagement is a sign of some critical flaw manifesting in humankind. An aversion to hard work leaves us craving quick fixes. We want all the answers in our palm for no more effort than the light touch of an index finger. We don’t have the patience for deep thinking. We’re too blasé and easily bored to struggle—especially with the intangible. I weighed these as possible causes of my indecision, but none seemed an appropriate explanation. In fact it felt like the opposite. I suspected the problem might be too much interest, too much caring.

Nor was my reluctance to pick tied to a newly discovered distaste for religion. On the contrary, I had found pockets of profound insight tucked within each faith. How was I to choose? In becoming a Christian, I could not be a Jew. In Judaism, I was not Muslim. In being Muslim, I gave up Buddhism. I had reached this strange crossroads where not picking among the religions felt like the best way to honor the religions. My not choosing wasn’t coming from a place of denial but, rather, a place of acceptance. And if I chose no affiliation, wasn’t I also—in a funny way—opting for all of them? It made me think of the symbol of the open circle, so important in mystical traditions like Kabbalah. Represented in everyday parlance as a zero, it implies absence—but at
the same time it also suggests receptivity.

In thinking this through, I was reminded of something that had made headlines briefly a couple years earlier. It had been a minor occurrence, no more than a footnote in popular culture, but I had paid attention because it seemed to hint at something bigger. In a live, televised performance from Times Square on New Year’s 2012, pop singer CeeLo Green sang John Lennon’s classic “Imagine.” A great vocalist paired with a fantastic song; lyrics that envision a world healed of conflict and violence. What could go wrong? Nothing—but for one tiny detail. CeeLo changed two words. In his version, “nothing to kill
or die for / and no religion too” became “nothing to kill or die for / and all religion’s true.” Lennon’s utopia got tweaked.

Instantly, the Internet lit up with comments. CeeLo received an avalanche of tweets and messages on his Facebook page. Most were voices of displeasure, saying the singer should be ashamed of himself—or worse. Rolling Stone magazine ran a brief story about it on its website, which produced a chain of almost six hundred remarks.

Among the more thoughtful commenters were those who speculated on what John Lennon meant (“I think ‘no religion too’ means they are fake! All religions are fake.”) or what CeeLo’s change implied (“I don’t get it. ‘All religion’s true’ seems to be an oxymoron!”). A few voices defended CeeLo. One wrote, “If I’m not mistaken, isn’t the meaning of the song to imagine a world without the ideas that separate us . . . If all religion were true wouldn’t that mean that all religion exists in harmony where people aren’t killing others because of differing beliefs?”

The Rolling Stone article characterized those whom CeeLo had outraged as “John Lennon Fans.” But was all the fuss really motivated by love for the lost Beatle? I suspected the truth was a bit more complicated. I thought they were more likely people whose distaste for religion had made the song—and in particular that line within it—something of an anthem. Lennon himself had a much softer take on religion. Among his many famous quotes is this: “People always got the image I was an anti-Christ or anti-religion. I’m not. I’m a most religious fellow. I was brought up a Christian and I only now understand some of the things that Christ was saying in those parables.” He also said, “I believe that what Jesus and Mohammed and Buddha and all the rest said was right. It’s just that the translations have gone wrong.”

Almost immediately after the controversy, CeeLo tweeted a mea culpa. Not long after that, he deleted it. In his next public mention of the kerfuffle, he sounded much less sorry. He said he stood by the altered lyric. I thought it was brave what he had done, and I now felt I understood it even better.

The whole point of each belief system I had explored, the motivation of its original thinkers, was to heal—ourselves and the societies in which we live; to help us see that we are a part of something, whole and connected. Yet too often they become another means of discord. Our belief systems keep us feeling special or superior, which are just different ways of feeling isolated. But it’s not religion that’s torn us apart, because even lack of belief does the trick if clung to with white knuckles. To eliminate the certainty—to take the conviction out of religion—changes everything.

I think more and more people are sensing this, which is why the ranks of the Nones continue to grow. What many of us are saying with our lack of affiliation is that we don’t want to take sides. Our stance overlaps with that of agnostics, who also maintain neutrality, though for slightly different reasons. Technically, an agnostic would pick a side if evidence proved which was right. Most Nones aren’t interested in who’s right. As far as we’re concerned, there is no right, only different paths to the final destination. One group claiming the truth at the expense of another is just the sort of thing we’re sick of because we see the destruction it’s done; used again and again to justify not taking care of one another or, worse, destroying each other. Perhaps Nones are trying something new: not picking sides is the side we’re picking. It might even be the most deeply religious decision we will ever make, our way of taking a stand for a more peaceful and loving world. If John Lennon were alive, I like to think he’d be right there with us.